Indians need to re-invest in the hope, freedom and democracy of Kashmir, including a quick restoration of a popular government 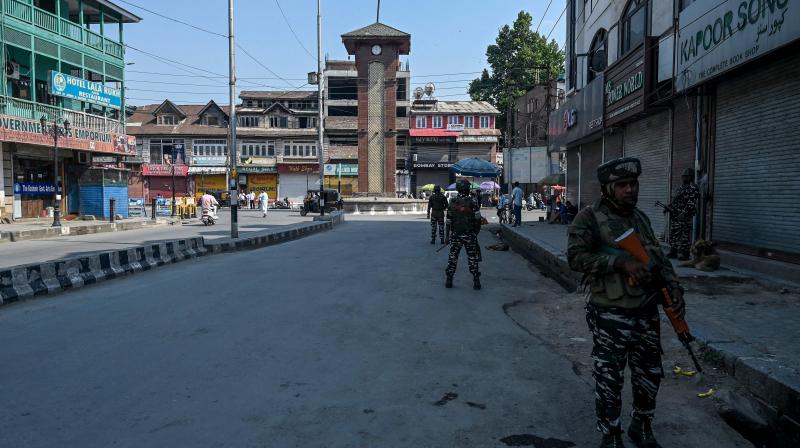 Paramilitary troopers stand guard in front of closed shops during the second day of spontaneous strike in parts of Srinagar on May 26, 2022, a day after the sentencing of Jammu Kashmir Liberation Front chairman Yasin Malik. (TAUSEEF MUSTAFA / AFP)

The life term sentencing of separatist and terrorist Yasin Malik by a National Investigation Agency court under Section 17 of the Unlawful Activities (Prevention) Act, after he pleaded guilty to all the charges, was very deserving.

The NIA court of special judge Parveen Singh was fair and just to both the spirit and word of the law in sentencing the chief of the Jammu and Kashmir Liberation Front to two life terms for terror funding; it also gave five sentences of 10 years’ imprisonment, besides levying several monetary fines, including one of Rs 10 lakh, for other offences under the UAPA and the Indian Penal Code.

Justice Singh was also wise and humane in not, despite strong arguments otherwise from the prosecution, giving the rarest of the rare death penalty, and allowing for the imprisonment terms to run concurrently. India’s rule of law received another pat on the back for having ensured a fair trial and adequate representation for defence to the accused, and now guilty, Malik.

The court, also wisely, did not give much credence to the post-crimes transformation claims of the terrorist, who argued that he had subsequently taken the path of non-violence, and had been politically legitimised by several Prime Ministers, by recognising his crimes to be “very serious” and aimed at “striking a blow at the heart of the very idea of India”, and separating Kashmir from India. On his party, Malik pleaded guilty to all charges including sedition and criminal conspiracy.

The sentencing of Malik, after the death of several separatist leaders over the last several years, effectively ends the era of militant politics, wherein the separatist terrorist funded from across the borders were the only ones who had an effective voice in the politics of the troubled Valley, or would be allowed to play a role.

Even though the Gupkar Alliance, including the two major parties National Conference led by the Abduallahs, and the Ms Mehbooba Mufti-led People’s Democratic Party, have called the sentencing “unfortunate” and a setback to the process of restoring peace and normalcy, they should not be mistaken to be of the same makeup.

Indians need to re-invest in the hope, freedom and democracy of Kashmir, including a quick restoration of a popular government backed by the mandate of the people, and not prolong the writ of a nominated executive government.

The sentencing, coming not too long after the delimitation exercise was concluded, gives hope that elections are around the corner. Such hope must not be belied, and it is most likely, the Centre will soon push for elections in Jammu and Kashmir.

Kashmir is willing to move beyond the Maliks of the Valley, their guns and their separatist politics, but the rest of India must move fast to embrace them more than halfway. We must make the likes of Malik irrelevant, but for that to happen fully, we must focus on the democratic leaders of the PDP and NC, and everyone else who trusts the ballot over the bullet and are willing to swear by the supremacy of the Indian Constitution.

After all, in Kashmir, or elsewhere, with all our disagreements in place, there is much else to agree upon; and once agreed, do the rest of the disagreements matter significantly?