India also made clear that besides fighting terrorism, it sought an Afghan-led, Afghan-owned and Afghan-controlled negotiated peace settlement. 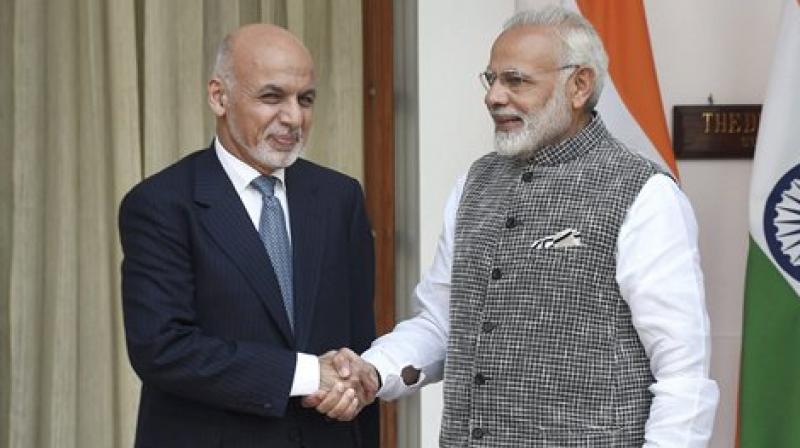 Prime Minister Narendra Modi and the President of the Islamic Republic of Afghanistan, Mohammad Ashraf Ghani, shake hands prior to their luncheon talks, in New Delhi. (Photo: PTI)

Optics is important in politics and diplomacy. Afghan President Ashraf Ghani’s day-long visit to New Delhi on Tuesday and his businesslike interaction with Prime Minister Narendra Modi, on the day US secretary of state Rex Tillerson landed in the Indian capital after visiting Islamabad, sought to emphasise that India should be seen as a part of the solution in Afghanistan, no matter what Pakistan thinks.

There was never any doubt about this since the Taliban were driven from power in 2001 following 9/11, though from time to time the US deferred to its “non-Nato ally” Pakistan and advised India to keep a low profile over its massive development activity in Afghanistan. In August this year, President Donald Trump’s policy officially raised India’s profile and urged New Delhi to go forth boldly in Afghanistan with its development goods.

That’s all that has changed since the Trump administration took over. President Ghani’s talks with Mr Modi covered familiar ground. Besides development and economic support, India agreed, as before, to provide security sector training and some equipment if Kabul wanted it. India has already made clear it won’t send any troops to Afghanistan.

Mr Ghani took pains to clarify that there was no secret pact with India to disadvantage Pakistan in any way. India also made clear that besides fighting terrorism, it sought an Afghan-led, Afghan-owned and Afghan-controlled negotiated peace settlement (with Taliban).

There’s nothing new here. The Afghan leader’s visit appeared timed only to reinforce the point that the US, Afghanistan and India were on the same page even if US-Pakistan friendship was a given.