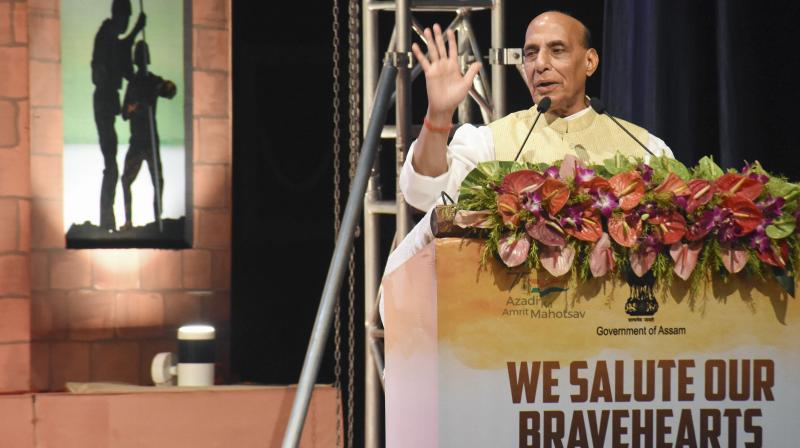 Mr Singh (in picture), while speaking in Jammu, gave a historic context to the theatres of war, while sharing an update on the rapid transformation of the Indian armed forces to adopting a joint theatre command for ensuring better and more enhanced coordination among all three services of the armed forces. —PTI

Using the platform of the Vijay Diwas celebrations to mark the 23rd anniversary of the victory of the Indian Army over Pakistani intrusion in Kargil, defence minister Rajnath Singh asserted with pride that India was a strong nation that does not bend or bow, and was fully capable of defending its territory against any hostile attempt to transgress into our sovereign soil, which was a timely and needed assertion.

Across the world, there is a definite sense of a war climate, with the raging conflict in Ukraine showing no signs of closure, or a thaw. China has been flexing its muscle over border conflicts not just with India, but also raising the possible red herring of an armed conflict to settle issues with other nations, including Taiwan, in the Indo-Pacific.

India, during its 75 years of existence as a sovereign independent nation, has had to fight to keep its flag flying free. It lost huge tracts of land to China during the 1962 war and to Pakistan, which still largely governs a large part of the occupied region in Kashmir (PoK). Pakistan, despite losing all its wars against India, including the last one in Kargil, is perpetually eager on creating a dramatic situation and a standoff in Kashmir and promoting cross-border terror.

Mr Singh, while speaking in Jammu, gave a historic context to the theatres of war, while sharing an update on the rapid transformation of the Indian armed forces to adopting a joint theatre command for ensuring better and more enhanced coordination among all three services of the armed forces.

While Jammu and Kashmir, and Ladakh, remain the most active theatres of war with our neighbours, India is, as the defence minister reiterated to assure the country, ready to thwart its “enemies when they try to cast an evil eye”.

Drawing lessons from the Kargil war, which saw active and battlefield evolved tactics for augmented coordination seen between Army, Air Force and Navy, Mr Singh attributed the joint theatre commands structure as a consequence of the lessons learnt.

Recalling the victories in 1948, 1965, 1971 and 1999 wars against Pakistan, owing to the efforts of the gallant Indian soldiers, a part of the great secular Indian Army, which was served by the likes of Brigadier Usman, who could have migrated after partition to Pakistan, but instead choose to serve India, Mr Singh spelt out without any ambiguity or doubt that India was ready as a strong nation today to fight and win any war in the future.

He also spoke of India’s continued commitment to a Parliamentary resolution to get back PoK and integrate the area into India, a message that beyond the necessary international strength assertion as a diplomatic ploy, also serves the political resolve of the BJP to put Pakistan on the backfoot.

However, to attribute the need to integrate PoK into India to the Hindutva ideology, by saying, how was it for Lord Shiva’s temple at Baba Amarnath was located in India but the Maa Sharda Shakti lies across the LoC is bound to be contested domestically.

But, if India’s armed forces, as well as common citizens, needed reassurance on our national resolve to protect our borders and integrity, Mr Singh delivered it emphatically.