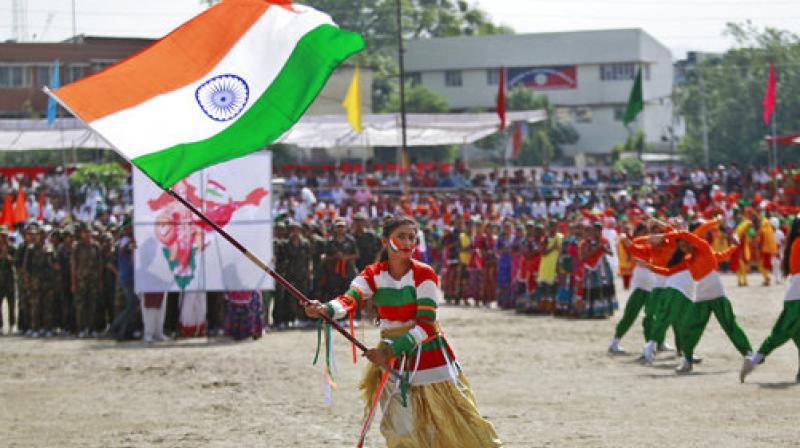 The lifting of limitations only means that Indians can progress to professing their love for the national flag and what it symbolises; it democratises the process whereby every household can own this symbol and its symbolism. — AP

The intent is clear with the government keen on making a success of the ‘Azadi Ka Amrit Mahotsav’ and the ‘Har Ghar Tiranga”, envisaging a national flag flying in every home come the 75th Independence Day. A kind of universalisation flows from this tweaking of the flag code after two decades to allow the tricolour to fly 24x7.

The earlier restrictions to do with preserving respect to the most visible symbol of the nation were not per se anti-democratic. The lifting of limitations only means that Indians can progress to professing their love for the national flag and what it symbolises; it democratises the process whereby every household can own this symbol and its symbolism.

The Congress, which had a bone to pick with the changing of rules to allow the flag to be made of “hand spun or hand woven or machine made, cotton / polyester / wool or silk khadi bunting”, may have been nostalgic about the connect with the hand spun thread that Mahatma Gandhi wove into our yearning for independent nationhood.

Times have changed. To reach more than 200 million households, flags have to be mass produced and more common and effective materials of the modern age are not to be denied. The nostalgic may love to stick to hand spun khadi, but school children have for long been as proud about pinning a paper or plastic mini flag to their shirt — the sheer thrill of it is priceless.

The nationalistic-minded can avoid China-made flags and the cynics are free not to put one up of any kind at their home for public display. But there is no reason to carp against democratisation of the idea of a flag that rises far above the idiosyncrasies of the ruling politician class of the dynastic or individual variety.

What we may be witnessing is an evolution as the original idea had been sectarian, with the two colours representing the two major communities and Gandhi adding the white to encompass people of religions other than Hindu and Islam. Today, the colours symbolise strength, purity and life and growth. Let not any narrow vision or misplaced nationalism come in the way of joyful celebration of 75 years since freedom came at midnight.