Act decisively to stop violence over a movie

States ruled by the BJP have allowed law and order to be challenged over fears of alienating lumpen elements. 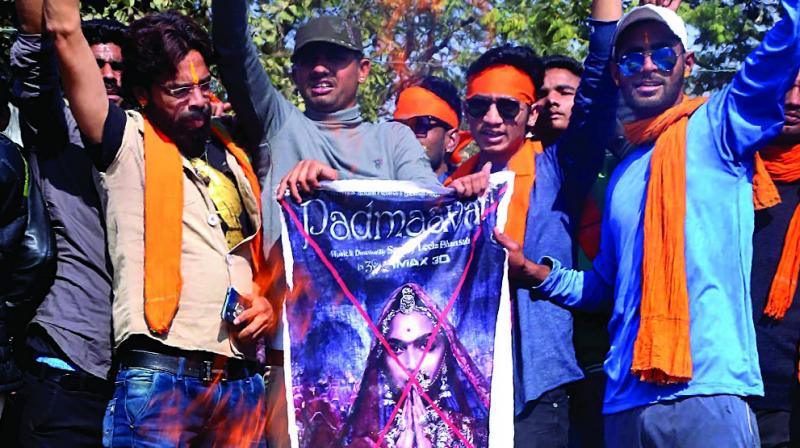 Members of Karni Sena burn posters of Padmaavat during a protest against the release of the film at Beawar in Rajasthan. (Photo: PTI)

Never in recent history could so few Indians have held so many to ransom as in the eventful saga over Bollywood film Padmaavat. It’s a poor commentary on governance that India should be so divided over the historical accuracy or otherwise of a film whose raison d’etre is entertainment. The division is telling. States ruled by the BJP have allowed law and order to be challenged over fears of alienating lumpen elements. They have declined to follow even the Supreme Court’s directive that a film cleared by the censors should be screened without any restrictions. Law and order is a state subject, and Rajasthan, Madhya Pradesh, Haryana and Gujarat have failed miserably to uphold the law and allow the film to run unhindered. Behind this is their tacit encouragement of the revolt against the film by the fringe Karni Sena.

Emboldened by the encouraging they got for their opposition to the film, that first stated around a year ago, over avowed inaccuracies while the movie was just being made, the fringe outfit stepped up the tempo. The film sets were vandalised, filmmakers attacked and ridiculous bounty calls made for several crore rupees to main lead actors like Deepika Padukone and theatres threatened. Those opposing a film they hadn’t even seen went to the extent of attacking hapless schoolchildren riding home in their school bus in Gurgaon, and the poor kids were left cowering behind bus seats as stones were thrown at them. This was the depth of depravity and lawlessness to which people were reduced, with their passions whipped up for no reason other than a movie loosely interpreting certain historical events in Rajasthan’s Chittor.

A spate of PILs have been filed in the Supreme Court on the failure of four states to follow its directives on taking care of law and order, allowing the screening of the film as well as for cuts in the movie. As a nation, we seem to have lost the fundamental argument that the making and screening of films is about freedom of expression. The maturity to accept artistic licence seems to have disappeared (hopefully temporarily) as trouble-making elements were able to play on the emotions of people on the so-called hurt caused to Rajasthani pride and valour. If the state governments don’t act decisively to rein in the troublemakers and allow screening of the film, they will lose all credibility over their ability to rule.

Outlandish as this may sound, the Army may have to be called out to maintain order while Padmaavat is screened for those willing to see the film and learn for themselves about the enormous fuss whipped up, which was sought to be contained by a consultative committee of historians and former royals of Rajasthan.