The rich symbolism of the breaking of the glass ceiling on Diwali day by a politician, was most celebrated in India 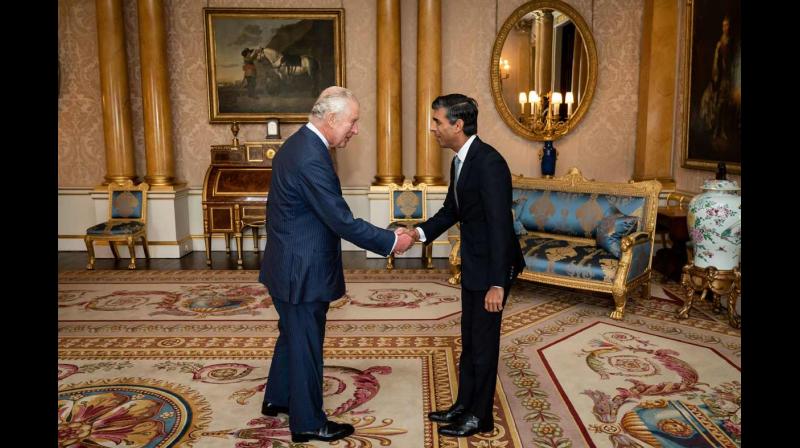 Britain's King Charles III greets newly appointed Conservative Party leader and incoming prime minister Rishi Sunak during an audience at Buckingham Palace in London on October 25, 2022, where he was invited to form a government. (Photo: AFP)

In a ground-breaking eventful transition of political power in Britain, a non-white, practising Hindu of Indian origin, who is also the youngest Prime Minister of UK since 1812, has ascended the rungs to occupy 10 Downing Street. The rich symbolism of the breaking of the glass ceiling on Diwali day by a politician, who gained prominence first in the world of corporate finance, was most celebrated in India. The country had gone gaga over one of its sons getting this opportunity to rule in the land of the former colonial masters, who came to India as traders of the East India Company before transferring power to the realm to rule the Indian Empire.

There is rum irony in the MPs of a predominantly white conservative party, with increasing claims to diversity among its elite, twice choosing Rishi Sunak as Britain’s last chance to get the UK out of its gravest economic crisis since World War II. Leaving aside the extraordinary story of the ethnicity of the incoming PM for a moment, what his advent does straightway is to bring calm and credibility to the UK gilt markets. Such a dislike had that market taken to the libertarian economic policies of Liz Truss and her misplaced belief in tax cuts without fiscal responsibility that its bottom was in danger of falling off.

Mr Sunak exudes a seriousness about the extent of the crisis that Ms Truss, a favourite of the 1,60,000 members of the Tory Party, in her disastrous 49 days in office, did not show.  Economic headwinds from a double whammy of a Covid-induced slowdown and rising inflation from spiralling energy prices in the wake of the Russian invasion of Ukraine, the threat of recession, a disunited party whose members are already complaining about not having a voice in choosing their Prime Minister and the awkward presence of his mentor and former boss Boris Johnson may weigh heavily on Britain’s third PM in seven weeks.

What Mr Sunak brings to the table is financial conservatism and the promise of stable government policies after the circumstantial necessity of the enormous size of his Covid rescue packages that made for him such a good connection with stricken people in the great human crisis. What he may have to leave behind now are the contradictions that earned him the “slippery Sunak” image, like his being a Brexiteer who did not pursue the dividends of Brexit hard enough, a free marketeer who authored the biggest State intervention during Covid and an elite more at home in Davos than among the people.

What Mr Sunak offers is competence and, as a principled pragmatist, financial prudence through Rishinomics which may, however, bring hardship to the people of the sixth largest economy as a corporation tax rise and national insurance may come to stay in his regime. As PM, he may be caught between a rock and a hard place but who better to have at the helm now when the markets expect discipline on public finances.

Further afield, his rise to prime ministership may have fetched him fancy accolades, including from Prime Minister Narendra Modi. Where he can be expected to score as a “living bridge” of UK Indians is in giving fresh impetus to work on the UK-India trade deal that was stalled by the quite unusual resistance to migration to UK of the Indian origin former home secretary Suella Braverman, herself the child of migrants like Rishi and born in Britain.