Every trade union, including the RSS-affiliated Bharatiya Mazdoor Sangh, has opposed the anti-labour provisions 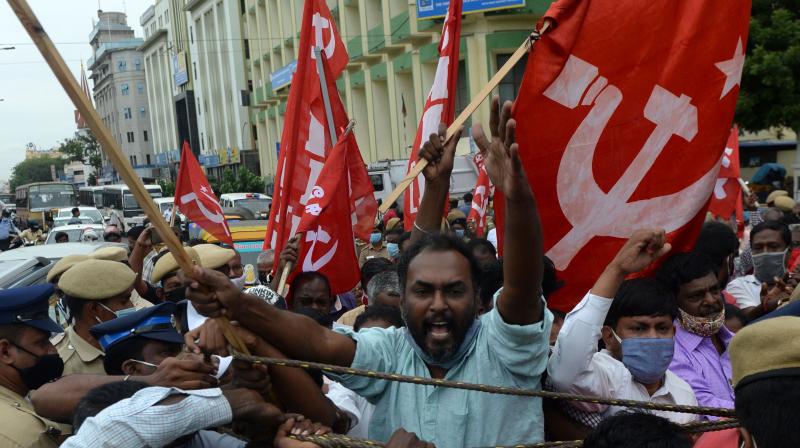 A member of the Communist Party of India protests against the government's new legislations. (AFP)

The government's new labour legislations, pushed through when the opposition was not in the House, will impact the lives of over 50 crore workers. The Industrial Relations Code 2020, the Code on Social Security 2020, and the Occupational Safety, Health and Working Conditions Code 2020, along with the code on wages, already enacted, subsume and replace 29 central laws that governed the country’s industrial relations.

The Industrial Relations Code now says a company cannot retrench and/or close its establishments without government approval if it has more than 300 employees. That number used to be 100. The law essentially throws workers' job security into the wilderness, but has been welcomed by industry because it makes hiring and firing easy.

The code also redefines the sole negotiating union in an establishment as the one in which more than 51 per cent of the workers are members. Establishments now need not heed the voice of smaller unions.

The Code on Social Security provides for universal social security to workers, including unorganised and gig and platform workers who account for over 90 per cent of the workforce.

The Bill also mandates the governments to set up social security funds for them and fixes the maximum hours of work at eight per day.

It remains to be seen how the provision to allow men to work in hazardous industries, albeit with safety measures, will benefit them.

A redeeming feature of the legislation is the attention it gives to inter-state guest workers: the government will now have to maintain a database on them online. They can also avail the benefits of the Public Distribution System either in their native state or their state of employment, and also access insurance and provident fund benefits available to other workers.

Critics have noted an alarming and unusual feature in the bills: it gives the government wide powers to frame rules that will form the operational part of the legislation. They include the conditions for increasing the threshold for lay-offs, retrenchment, and closure, for applicability of different social security schemes to establishments, and specifying safety standards, and working conditions to be provided by establishments under the occupational safety code.

The government has made its intention clear when it said the purpose of labour reforms is to provide a transparent system to suit the changed business environment. The codes also empower state governments to offer relaxations in provisions on labour security, with an aim to trigger a race to attract capital.

That the codes cleared parliamentary scrutiny in less than three hours of discussion, that too when the opposition was boycotting the proceedings, reflects the disdain the government has not only for parliamentary practices but also to the people whose lives they will impact.

The government showed a similar high-handedness when it got the farm bills passed. Every trade union, including the Bharatiya Mazdoor Sangh affiliated to the Sangh Parivar, has voiced their protest against the anti-labour provisions in the codes. It remains to be seen how the government will tackle the disaffection within India’s workforce.