It’s undeniable that the Gandhis – Sonia, Rahul and Priyanka -- are the Congress’ only nationally recognisable figures 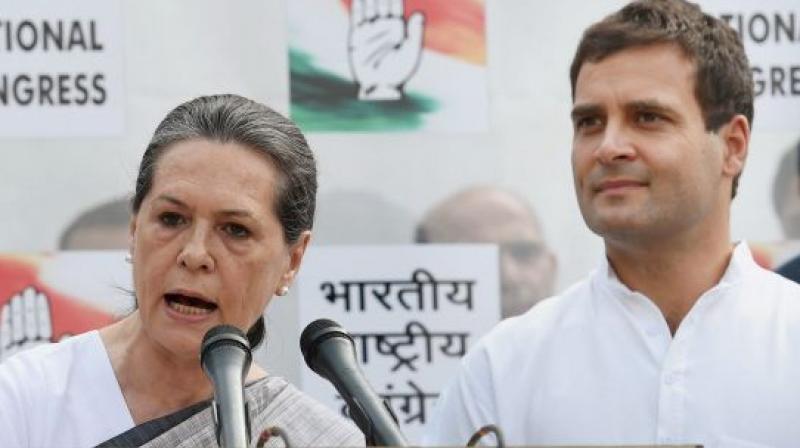 The serious issues and concerns raised in a letter by a galaxy of senior Congress leaders, including several former Union ministers and former CMs, to Mrs Sonia Gandhi earlier this month are far-reaching, and how the party handles it will be crucial not only to its own future but to the state of our polity.

While Mrs Gandhi was quick to call a meeting of the CWC to discuss the matter on Monday, the questions it raised are too wide-ranging to be resolved at one meeting.

The letter flagged the sense of drift in the party that many raised of late, and sought a “full-time” and “effective” leadership that will be “visible” and “active”.

To an extent this could be seen as criticism of Mrs Gandhi’s stewardship for the past 12 months as interim president. But it would be wrong to regard her as its target -- Mrs Gandhi is hugely respected by all sections of the Congress -- and the letter’s primary aim might have been to deter any attempt to reinstall her son Rahul as Congress president, interim or otherwise.

Mr Gandhi’s two-year term as chief wasn’t a great success, though he did lead it to a string of Assembly victories, before presiding over the Congress’ second successive Lok Sabha debacle in mid-2019, after which he swiftly resigned.

Many Congressmen are unhappy that though not having any formal role, he plays an active role behind the scenes and takes decisions that “create confusion”. Many are upset that he doesn’t listen to them or they don’t have any access to him.

It’s undeniable that the Gandhis – Sonia, Rahul and Priyanka -- are the Congress’ only nationally recognisable figures. All others are identified with a state or region.

That gives them a unique standing. But that said, the Congress must also accept that if the Gandhis – for whatever reason – want to pass on the mantle, India’s only national Opposition party must make other arrangements.

If it showed wisdom, it would be a huge mistake to treat the letter’s signatories as dissenters or rebels -- let alone accuse them of playing the BJP’s game. Most have served the Congress for decades, many all their lives.

It would do well to treat the letter as a wake-up call, on how to revitalise India’s grand old party so it can take on the BJP as well as several regional rivals.

Six years after it lost power to the Narendra Modi-led BJP, and again last year, the Congress failed to make any honest introspection on the reasons for successive defeats.

Any problem cannot be tackled until one acknowledges it in the first place, but the Congress prefers to brush all inconvenient truths under the carpet. That is no solution. In any democracy, dissent, discussion and debate only strengthens a party, not weakens it.

Congress leaders could look towards America’s Democratic Party, for instance, on how widely divergent views, freely expressed, built a stronger organisation to focus on the removal of Donald Trump.

In India, the issues are many – the government’s handling of the economy, the pandemic, the Chinese intrusion, what stand to take on the Ram Mandir – which the party should discuss in depth before taking on the BJP.

A stronger Congress means a stronger Opposition, which is vitally needed in India so that a government with a sweeping parliamentary majority can be kept in check.