NCP was eventually the only real beneficiary and controlled the govt and power, while the figurehead Thackeray lost touch with his own party 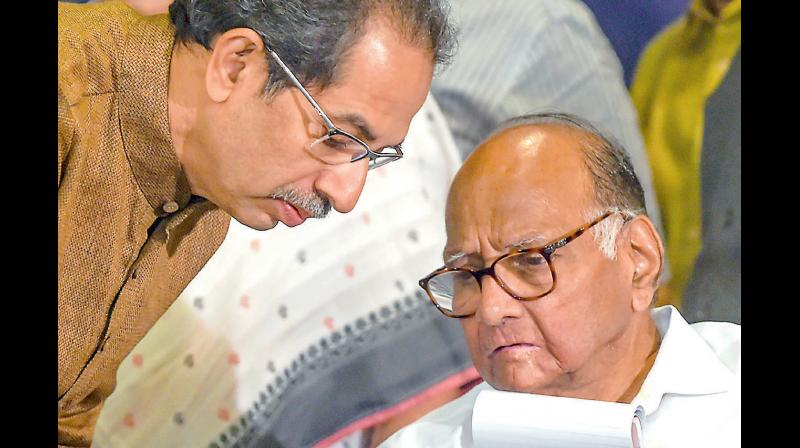 A marriage with three partners seldom leaves any of them happy for long. An unsustainable affair, one without a common ideology, only a common enemy, was bound to fail sooner than later, brought down by the unbearable weight of its own contradictions.

The post-election alliance of convenience, without any ideological glue, tangentially against the mandate of the people of Maharashtra, stitched on the slick justification of interpreting politics as the art of the possible, lasted half its term purely as a pursuit of power.

The Shiv Sena got a mandate to form a government in the state as an alliance partner of the BJP, the senior party, but refused to stick to it over a disagreement over the chief ministerial post. The BJP, sensing a mandate being robbed, did its own slick manoeuvring, and came out embarrassed and exposed in the Ajit Pawar-backed oath-taking of Devendra Fadnavis.

Uddhav Thackeray became chief minister, his long-cherished dream after the MVA was created. The Aghadi was a brainchild of Maratha veteran Sharad Pawar who ensured that the NCP and the Congress accepted their ideological opposite, the Shiv Sena, a hardcore Hindutva party, into its fold. Their sole goal — keeping the BJP out of power.

The NCP was eventually the only real beneficiary and controlled the government, and power, while the figurehead Mr Thackeray lost touch with his own party. The retaliation was only a matter of time, of when and by whom, not if. It came but not as a surprise, except for those who missed the signs.

The Rajya Sabha polls, followed by the elections for the members of the Legislative Council left little doubt for real watchers that rebellion was brewing in the Sena ranks. But the party heads were in denial.

Then Eknath Shinde made his surgical strike, claiming Hindtuva was the cause of his action, and evoked the commitment to the late Balasaheb Thackeray to assuage sentiments in the Sena rank and file, preventing any major popular uprising against the MLAs operating from a faraway destination in a “safe state”.

As the drama unfolded on live TV, Mr Uddhav Thackeray woke up to the realities, too late, and offered too little by way of explanation, or a counter-offer. Clueless throughout, he quickly vacated the official CM’s bungalow, but dragged his feet when it came to putting in his resignation.

Amidst it all, the Congress had little role but tried to send its senior leaders, including former Madhya Pradesh chief minister Kamal Nath, who must know the pain of this BJP act too well to try to make a difference. They obviously did not succeed. The BJP has kept a happy silence, enjoying the best seats to the show.

As the endgame nears, there are many questions that arise. Should pre-poll alliances which win an election change its partners? Should Central misuse of agencies like the CBI or ED for political ends be taken as a given, or a template created to ensure such risks are minimised? Are horses for courses a pragmatic reality, against which no didactic polemics have a chance?

In the end, there is only one satisfying lesson — the people must get a government they want, reflect, aspire and vote for. The rest is to ensure legal and Constitutional compliance with that will.