This is the first time in 71 years that a British judge will not be on the bench. 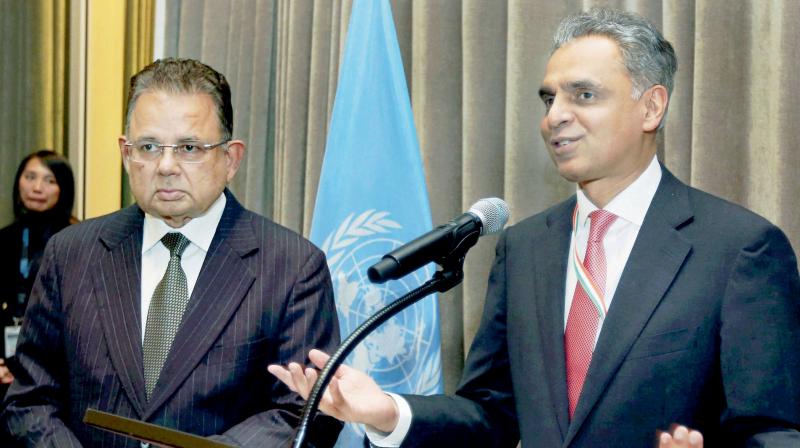 India’s permanent representative to the UN Syed Akbaruddin speaks during a reception in the honour of Dalveer Bhandari (left) in New York. (Photo: AP)

The old order is changing. It may have taken Britain a while to accept the reality, but it finally did so, withdrawing its candidature for a sitting judge of the International Court of Justice, allowing India’s Dalveer Singh Bhandari to retain his place. This is the first time in 71 years that a British judge will not be on the bench. This victory is as much India’s as of the larger global community, with the General Assembly establishing its supremacy over the Security Council’s charmed circle, whose five permanent members — the US, Britain, France, Russia and China — enjoy veto powers. India garnering the support of nearly two-thirds of the General Assembly highlighted the emerging world order, that has reason to resent the old order, with extraordinary powers vested in a few countries at the expense of the many.

Monday’s UN victory didn’t come easy. Britain had even toyed with the idea of a rarely-used mechanism of a joint meeting of the Security Council and General Assembly to break the continuing deadlock in the election, where a candidate needs a majority in both the UNGA and UNSC to win a place in ICJ. India’s wide diplomatic outreach and its salient position in the Group of 77, comprising mostly developing nations, saw it emerge victorious with Britain throwing in the towel, reasoning that its friendly ties with India were best not damaged in this particular fight between a clear majority and a privileged minority. The outcome doesn’t necessarily promise a fairer UN, where the Big Five still have the veto edge, but it does shed light on a world that is transforming.