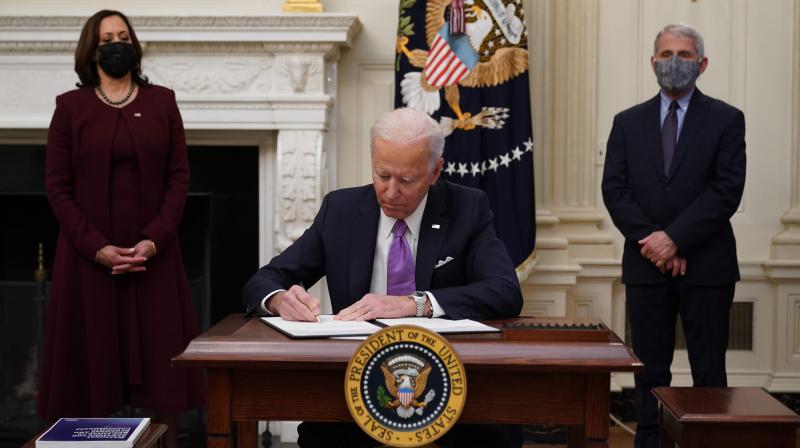 US President Joe Biden signs executive orders as part of the Covid-19 response as US Vice President Kamala Harris (L) and Director of NIAID Anthony Fauci look on in the State Dining Room of the White House in Washington, DC, on January 21, 2021. (MANDEL NGAN / AFP)

Young American poet Amanda Gorman may have stolen the show at the inauguration of the new US President with her words in verse: “And so we lift our gazes not to what stands between us, but what stands before us.” In a sense, the poetic line summarises Joseph Robinette Biden Jr’s fundamentally reassuring message that the United States can heal while it recovers and rebuilds even as he attempts to reconcile and rectify the stark differences brought to the fore in four years of the Donald Trump era. The sense of calm resolve that Mr Biden, America’s 46th President, conveyed amid rhetoric and realism in bringing up “white supremacy” and “domestic terrorism” might have been just what was required after the tumultuous events of just two weeks ago when the same US Capitol, a pillar of democracy, was under siege.

Mr Biden’s ability to find the right words as he plays the healer who can stitch together the seemingly unbridgeable divide was the highlight. His talk of “American aspiration”, as opposed to the “America First” that his predecessor had emphasised at his 2017 inaugural, was tempered by post-pandemic humility after the US has been scarred more than any other nation with 400,000 deaths and millions more sick. The advent of the new presidency is not so much a transition as a sea change from the rule of his predecessor who showed scant regard for basic science and who upended news cycles with untruths distributed on social media platforms. In the face of crass challenges to democratic traditions, Mr Biden’s call for public comity was comforting: “Let’s begin to listen to one another again, hear one another, see one another.”

“Without unity there is no peace, only bitterness and fury, no progress, only exhausting outrage,” helped echo the ringing truth of old maxims on unity amid diversity that the world seems to have forgotten, thanks to the cascade of crises carried by the virus including the disruption of large parts of the global economy.  In a welter of executive action, Mr Biden is bringing the United States back into the Paris agreement on climate change and into the World Health Organisation, besides stopping the construction of the “Mexican Wall” and addressing immigration issues thrown up by a racist and insular predecessor. The liberal revival promises more towards repairing hurt allies and equitable trade deals, obviating the need for tariff or sanctions-ridden confrontations that Mr Trump’s Washington had so preferred.

The dazzling optics of fireworks lighting up Capitol Hill was in keeping with the celebration of the inauguration while celebrity entertainers ushered in sobriety in view of the Covid-riddled times we are living in. There were messages to be read too in the ascension of vice-president Kamala Devi Harris, the first Black American and first person of Indian descent who was sworn in with her hand on two Bibles. The absence of the outgoing President Trump seemed inconspicuous, though he had the decency to leave a “generous letter” for his successor. In the end, the oldest democracy did survive the threat even as the “Proud Boys”, who were eulogised by Mr Trump, began mocking him as “a total failure”. One can only hope the return to decency and truth in America might ease the path to a global revival too.