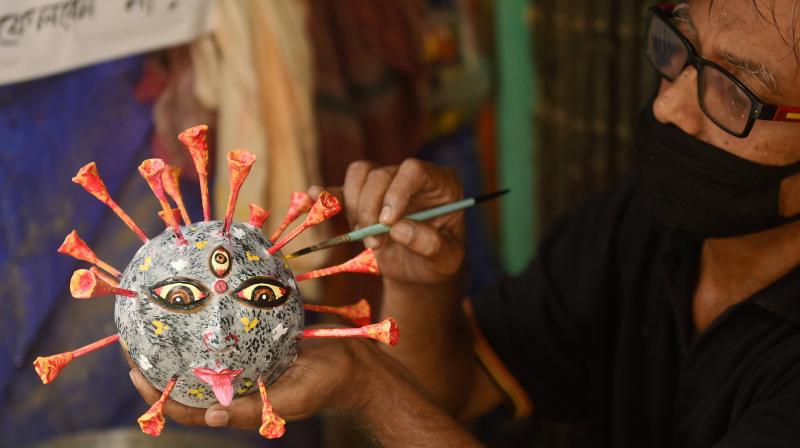 An artist makes a coronavirus themed idol for Puja festivities at a workshop at Kumartuli in Kolkata. PTI photo

The Calcutta high court’s order directing authorities to treat puja mandaps as containment zones and ban entry for the public there is welcome as the country is facing the threat of another wave of Covid-19 after the festival season. It has allowed the organisers, numbering up to a maximum of 25, inside the pandal but added a rider that their names should not be changed every day so that the concession is not misused and more people gained entry. In short, the court has taken care not to disturb the rituals but ensured that they do not end up super spreader events.

Experts have been warning for quite some time about the festivals torpedoing the efforts to contain the pandemic. Union health minister Dr Harsh Vardhan has the other day pointed out that Kerala witnessed a sudden spurt in Covid-19 cases after Onam. However, hardly any concrete steps were initiated at the national level, though some states, such as Maharashtra and Karnataka, had restricted the scope of functioning of places of worship during the festivals. While Maharashtra delayed their opening, the Karnataka government decided to disallow tourists from attending Dasara procession, one of the top offerings of the state’s tourism calendar.

Article 25 of Indian Constitution offers the right to "profess, practise and propagate religion“ but “subject to public order, morality and health”.  Now that the judiciary has stepped in and made it clear that ‘health’ is a concern in these times of the pandemic and the right to practise religion can be restricted, the governments at the Centre and the states must take it forward and ensure that the country get past this festival season without allowing the virus a free run. It is time the Election Commission of India also thought of imposing similar restrictions in places which are going to polls now.