A step for gender justice

It’s not certain if marital discords are best settled by jailing one of the parties. 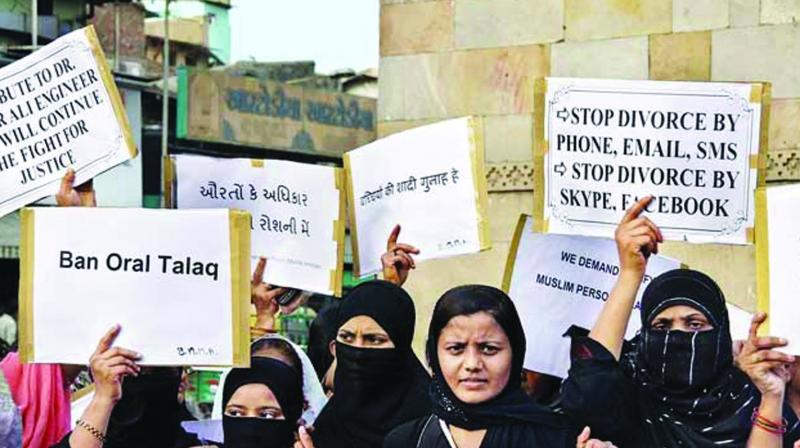 The Supreme Court ruled last year that triple talaq is unconstitutional, but despite that it is suspected the the practice still prevails with Muslim men divorcing their wives. (Photo: File)

Our politics is such that a significant social reform like abolition of instant triple talaq, or talaq-e-biddat, has to be brought in through an ordinance rather than comprehensive legislation. The Supreme Court ruled last year that triple talaq is unconstitutional, but despite that it is suspected the the practice still prevails with Muslim men divorcing their wives. By making it an offence with a jail term upto three years, a tough message is being sent out that this is a crime and violators would brought to book. It’s not certain if marital discords are best settled by jailing one of the parties. Nor is an ordinance the best way out of the legislative impasse in the Rajya Sabha due to which the government was unable to try to pass the Muslim Women (Protection of Rights in Marriage) Bill even though the Lok Sabha had approved it.

There is, however, no doubt that triple talaq is not in conformity with foundational principles of gender justice, and has no justification in a society that has evolved into modern times, but with some needless historical baggage like triple talaq and social evils like casteism. It appears that in the absence of an informed debate and broader consultation, the measure has flaws, and it remains to be seen how it works if men do break the law. The clause under which only the wife or a close relative can lodge a complaint builds some safety against misuse, that can be expected in all matters regarding marital discord. The ordinance would serve its purpose, however temporary, if some good does flow in terms of initiating social and gender justice for women.