Given the circumstances of the ongoing tussle in Rajasthan, it will be extremely inadvisable to inject the CBI 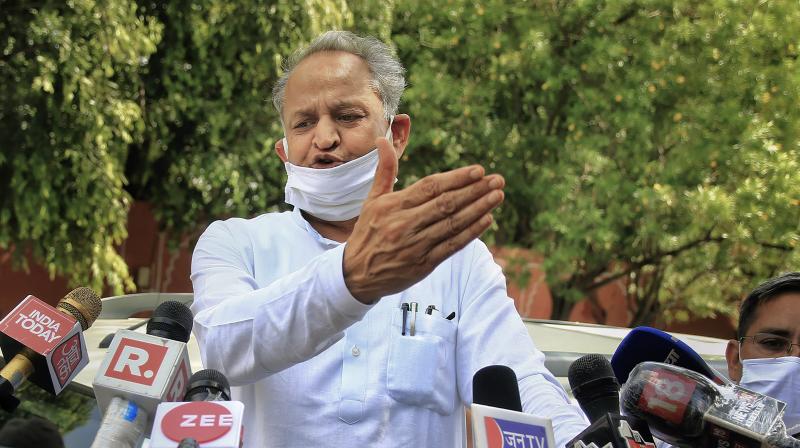 Rajasthan Chief Minister Ashok Gehlot addresses the media after visiting the State Governor at his residence, in Jaipur. PTI Photo

The Congress’ charge reiterated Friday that the BJP was conspiring with rebel Congress MLAs to bring down Ashok Gehlot’s government in Rajasthan, the release of audiotapes to buttress its claim and the naming of Union minister Gajendra Singh Shekhawat for his role, unsurprisingly led not just to a BJP denial and Shekhawat’s claim it was not his voice on the tapes, but also a demand from the BJP for a probe by the Central Bureau of Investigation into alleged phone tapping.

Earlier, the Rajasthan police’s anti-corruption bureau had registered FIRs over the audio tapes in which rebel MLA Bhanwarlal Sharma is heard talking to two people, one allegedly Shekhawat and the other one Sanjay Jain, who has since been arrested. (In another tape, MLA Vishvendra Singh, recently sacked as a minister, was also heard.)

Given the circumstances of the ongoing tussle in Rajasthan, it will be extremely inadvisable to inject the CBI into this matter, given its reputation as the handmaiden of the ruling party at the Centre.

In fact, given that this drama is essentially political in nature, it would be best to keep even the state police out, and settle matters politically.

One should remember it was the notice sent to former deputy CM Sachin Pilot by the Rajasthan police’s special operations group, over its probe into the BJP “plot” against the Gehlot government, that triggered the young leader’s revolt earlier this month.

Pilot and the MLAs supporting him, who were issued disqualification notices by Assembly Speaker C.P. Joshi, now have till Tuesday to submit their replies, on the orders of the Rajasthan high court.

If the Speaker, true to the bipartisan nature of his office, acts impartially, he should give both sides a fair hearing. The rebel MLAs say while they have complaints against the Gehlot government, they had in no way indulged in any “anti-party” activity.

If the accusation is that some or all of them were in touch with BJP leaders, the same charge could be levelled against the chief minister himself, who supposedly kept a back channel open to former CM Vasundhara Raje Scindia.

If Gehlot is correct to claim that he has majority support, particularly after two MLAs of the Bharatiya Tribal Party, who were earlier sitting on the fence, returned to his fold over the weekend, all he should do is request the governor and Speaker to hold an Assembly session at the earliest, and prove his strength on the floor of the House.

For that to be credible and legitimate, it is important that all MLAs are allowed to participate and vote.

It is easy to believe that the BJP and the Centre – as they have so many times in so many states earlier – went out of their way to bring down the Ashok Gehlot government.

But it is also important to remember that the BJP didn’t create the bitter discord within the Rajasthan Congress: it has now come to light that the CM and the deputy CM have not been on talking terms since their government was formed over a year and a half ago.

This is a certain recipe for disaster, and the Congress leadership in New Delhi would do well to put its house in order before more state governments are gobbled up by the BJP.