AA Edit: Ram Navami meeting at Ayodhya is an invitation to disaster 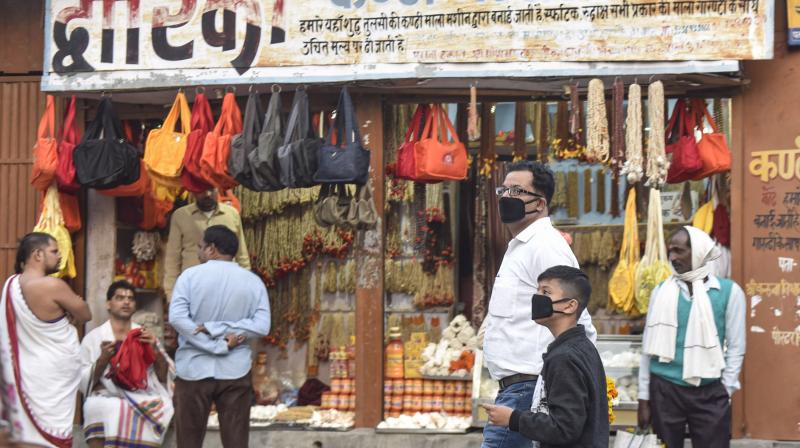 People wearing protective masks in to protect against the coronavirus pandemic walk along the Ramlala market in Ayodhya on March 14, 2020. Uttar Pradesh chief minister Yogi Adityanath is planning to hold a massive congregation of religious seers on the occasion of Ram Navami at Ayodhya from March 25 to April 2 despite the threat of the coronavirus (Covid-19). (PTI)

Serhii Plokhy’s magnificent book Chernobyl: The History of a Nuclear Catastrophe, about the 1986 nuclear reactor accident, describes in great detail its horrific aftermath. Four days after the accident — despite the radiation poisoning deaths and the deep crimson sky, at night, above reactor number 4 — the Soviet Union insisted that the May 1 parade must be held in Kiev as usual. (It’s a political decision to ward off Western propaganda against the dying empire.)

Much like that bizarre decision is Uttar Pradesh chief minister Yogi Adityanath’s obstinacy on holding a massive jamboree on the occasion of Ram Navami at Ayodhya, from March 25 to April 2 — during the potentially most dangerous phase of a likely community spread of the coronavirus (Covid-19).

Some in the administration wanted to have the event telecast live by Doordarshan so that pilgrims didn’t have to make the journey to what would likely become a gigantic petri dish of pathogens, but that was shot down by the saint community, who will not even discuss the possibility of postponing the event.

Instead, officials say that lakhs of likely pilgrims are expected to wear masks, as if that were the one impenetrable shield that will save India from a virus that has already infected 2.2 lakh people worldwide, killing approximately 10,000 of them.

That India has so far escaped a massive infection could be because of under-reporting; but Western health experts predict the next big explosion of infections and deaths would be in India, Russia and Africa, in that order. If a lakh people, at the very least, show up in Ayodhya, not only would they expose themselves to an infection — there would be a multiplier effect as they travel home by train and then mingle in their communities. It is a horror movie scenario.

Yet the Yogi Adityanath government wishes to go ahead because Ram Navami is seen as having significance coming after the recent judicial verdict handing the site of the former Babri Masjid over for the construction of the Ram Mandir.

Ayodhya-based Mahant Paramhans nonchalantly says: “Lord Ram will protect his devotees” from the coronavirus. Indeed, Ayodhya’s saints are planning a yagna (fire offering) to the gods to ward off the coronavirus. It may be noted that several big temples have already conducted this puja but to no avail — instead the number of cases is growing daily.

Yet it seems hard for the lunatic fringe to shake off its superstitious beliefs. The religious lot will not back down, and possibly Prime Minister Narendra Modi is caught in a tight situation having to choose between the holy men at the core of his constituency and his responsibilities as head of the government. We would hope that on this occasion better sense prevails, and that the WHO guidelines are followed rather than a swami’s rituals.