The lesson for India’s oldest party, which now appears to be in a semi-somnolent state — is that the road to revival is not closed 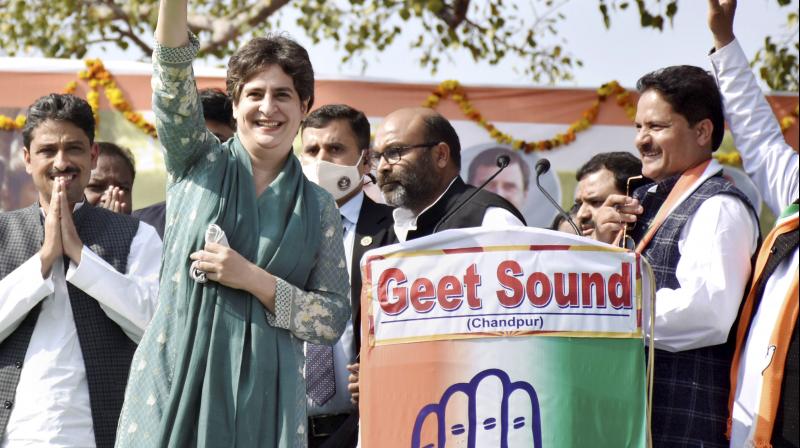 Congress National General Secretary Priyanka Gandhi during a 'Kisan Mahapanchayat' in support of farmers agitation against the three farm laws, at Chandganj in Bijnor district on Feb. 15, 2021. (PTI)

The spectacular sweep by the Congress in the civic polls in all three regions of Punjab earlier this week presents an object lesson to the Narendra Modi government as well as the Congress Party itself. The poll results have pushed the otherwise powerful Akali Dal, which derives its authority from Sikh religious forums, and the BJP into a narrow corner.

The lesson for India’s oldest party, which now appears to be in a semi-somnolent state in many parts of the country — is that the road to revival is not closed. But there is a proviso: in the states the party must be led by local stalwarts who have come up the political ladder in the normal course of elections and manoeuvring, and not by lightweight flunkeys accidentally selected by the central leadership and its nominated committees on a whim or to bestow personal favours.

In Punjab, chief minister Captain Amarinder Singh, in spite of his advanced years, proved his mettle. He gave mature political leadership. He could instinctively pick issues to highlight that matter. He also dealt with upstarts favoured by the Centre in a manner that did not raise any dust and he did not throw tantrums, although he is a maharaja. Attempts by his opponents to throw barbs of a personal nature at him cut no ice.

No doubt, the farmers’ agitation helped the Congress greatly. Former party chief Rahul Gandhi’s initiative in the Lok Sabha in holding two minutes silence — by treading into the Speaker’s domain — in memory of the farmers who have died in the agitation could hardly have gone unnoticed in Punjab or anywhere else.

But these meaningful acts of symbolism may not have gone far enough and been translated into votes, were it not for the astute leadership of the state by Captain Amarinder and the tending of the state party organization by PCC chief Sunil Jakhar in a sober manner. The Congress high command, such as it is, will doubtless realise that the party could have swept the Assembly election in neighbouring Haryana if only it had handed over charge of the party to Bhupinder Hooda early enough.

The Modi government and the ruling BJP cannot but have noticed that the day after the Punjab civic poll results came out, Rakesh Tikait, who has by now emerged as a famous farmers’ leader from western Uttar Pradesh, called on the community of farmers to intensify their agitation and not return home until the controversial farm laws are rolled back. It is not unlikely that the farmers will show up in poll-bound West Bengal to queer the pitch for the BJP, which is trying hard to challenge CM Mamata Banerjee.

The Punjab results also point to the fact that the dissatisfaction with the Centre’s policies that have fuelled unemployment, shutting down of micro, small and medium industries, and the relentless climb in diesel and petrol prices, are hurting the urban voter badly. The government leadership and the ruling party leadership need to look sharp and make wise choices.