The Global Hunger Index (GHI) 2020 published this week has put India behind most of its south Asian neighbours, including Bangladesh 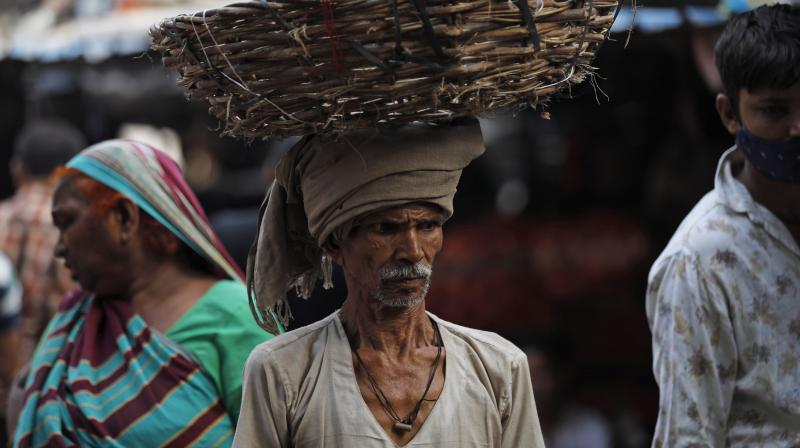 A man walks balancing a basket on his head at a vegetable market in Lucknow, India. (AP)

The recent World Economic Outlook report of the IMF which predicted that Bangladesh’s per capita gross domestic product (GDP) this year to $1,888, a notch higher than India’s $1,877, was a shocker to many who believed in India’s growth story. But the apologists of the government countered the report saying it is only one of the indicators of economic prosperity and there are many others for India to take relief from. The Global Hunger Index (GHI) 2020 published this week, instead of offering some relief, has delivered another shocker. It has put India behind most of its south Asian neighbours, including Bangladesh. GHI has ranked India at 94 among 107 nations in the GHI and placed it in the “serious” hunger category. Bangladesh, Myanmar and Pakistan, ranked 75, 78 and 88, respectively, are also in the same category but are above India. Nepal, ranked 73rd and Sri Lanka 64th are better off and are in “moderate” hunger category.

There are several factors which could have landed India and its people in this situation but population cannot be among them as China, the world’s most populous nation, is among the top 17 nations with GHI scores of less than five.

Hunger is not a new phenomenon in India but the GHI signals the dire future that awaits the country. Three of the four indicators in GHI refer to the way how children are taken care of and this shows India in a poor light. The government, especially Prime Minister Narendra Modi, misses no opportunity to tell the world that India is poised to reap the demographic dividend. But the GHI offers solid data for the planners if they want to sustain the advantage to the next generation as well.

It is not that all is lost and the government makes no attempt to address the issue. One glimmer of hope is that the Indian score has been coming down from 32.2 in 2010 to 30.3 in 2019 to 27.2 in 2020. The National Nutrition Mission or Poshan Abhiyan, which aims at bringing down stunting of children to 25 per cent by 2022, should have helped make a difference. And this must be sustained with enhanced budgetary allocations. India has of late made a stunning performance in improving its score in the ease of doing business index thanks to a targeted approach; it should be able to repeat the feat in GHI, too, for we owe it to our future, that’s our children.