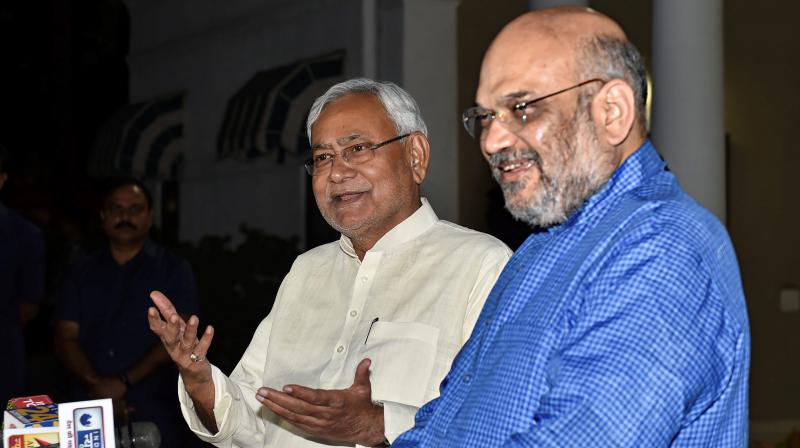 Bihar chief minister Nitish Kumar’s wonderment about how history can be revisited is as much pregnant with political meaning as the call of home minister Amit Shah on its need. “History is what it is. History is history,” Mr Kumar said in reply to Mr Shah’s statement that “we can write our own history.”

While the home minister who had his political baptism in the Rashtriya Swayamsewak Sangh (RSS) has reasons to complain that most historians ignored great Indian rulers and empires such as the Cholas and the Pandyas and focussed on Mughals, Mr Kumar, brought up in the Lohia school of socialism yet remaining a bed fellow of the right wing, knows what will happen if the ruling dispensation embarks on writing history in a way it wants to.

It is not a secret that the RSS wants to change the way Indians and others see the history of this ancient land. Its roadmap for 21st century India is a comprehensive project, as per its own ideologues. It involves rectifying “falsehoods and misrepresentations”, including events it deems to be important, launching university research to reclaim the “real” Indian history and exposing what it calls “perverse imagination masquerading as historical-literary works”. Several BJP-ruled states including Karnataka and Madhya Pradesh are at present on the project so that students get to study a history that the project envisages.

It is not just history that the BJP and RSS want to take a relook at; science is also on the radar. It was none other than Narendra Modi who, while inaugurating the Indian Science Congress immediately after taking over as Prime Minister, drooled over the scientific prowess of India’s past and said the birth of Karna was a result of genetic science and Lord Ganesh’s head was the handiwork of a plastic surgeon.

If science with its rigours of quantitative evidence generation can be reinterpreted, then it will not be all that tough to do the same with the social sciences. Welcome to the brave new world of Indian history, protestations of the Nitish Kumars notwithstanding.