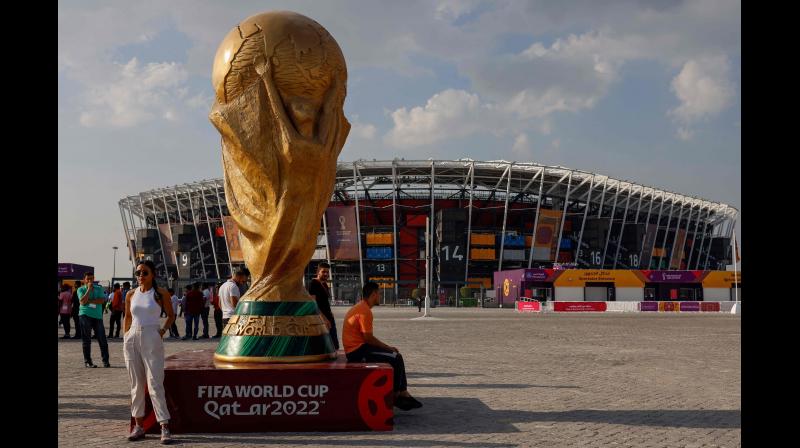 People pose for photos next to a giant replica on the World Cup trophy in front of Stadium 974 on November 18, 2022 in Doha, Qatar, ahead of the Qatar 2022 World Cup football tournament. (Photo: AFP)

As the greatest show on turf, beginning on Sunday at the Al-Bayt stadium to end in a grand finale on Dec. 18 at the iconic Lusail Stadium in Doha, Qatar, billions of fans of the world’s most popular sport will be glued to their television sets, following the fortunes of their national team or their favourites at the 2022 Fifa World Cup.

A maiden World Cup triumph beckons soccer’s superstars like Neymar Jr of Brazil, Lionel Messi of Argentina and Cristiano Ronaldo of Portugal while Karim Benzema and Kylian Mbappe will turn out for the defending champions France. On show will also be six new stadiums among eight in the small but fossil fuel-rich Arab state that will be the controversial host, besides the capital Doha which will be the major beneficiary of a $200 bn spend to present Qatar to the world.

FIFA officials are asking nations not to bring political or ideological issues to the World Cup where the focus should be on the beautiful game. That may hardly be possible even as the host nation is wary of a culture clash as soccer fans descend on the tiny state from around the globe. Women spectators may not be arrested if they attend events in skirts and revealing dresses but there will be areas where severe dress restrictions may apply in Qatar.

Having decided to make the World Cup an exception to public drinking by allowing beer tents around the arenas to respect Fifa’s commercial partners, ultra-conservative Qatar has now backed out. Alcohol may still be served in VIP areas, but Qatar seems least bothered about fulfilling conditions under which it was granted the conduct of the event.

The Qataris have tried to “greenwash” the issue over exploitation of cheap labour for building stadiums and city and country infrastructure even as several thousand workers are suspected to have died since the nation won the bid polemically, with generous monetary inducements for Fifa votes.

The scant regard for women’s rights is a point that critics are hammering as the world tunes into Qatar whose credentials to host such a universal event as the soccer World Cup is increasingly under scrutiny. The irony is even as Qatar hosts the 2022 event, the Fifa’s Italian president, Gianni Infantino, is encouraging Saudi Arabia to bid for the 2030 World Cup.

The players are battling against the daytime desert heat with vegetable and fruit juices while money plays a huge role in the choice of hosts of such a compelling spectator sport.