Is it because state elections are coming up and communal embers can be stoked by setting certain kinds of prisoners free? 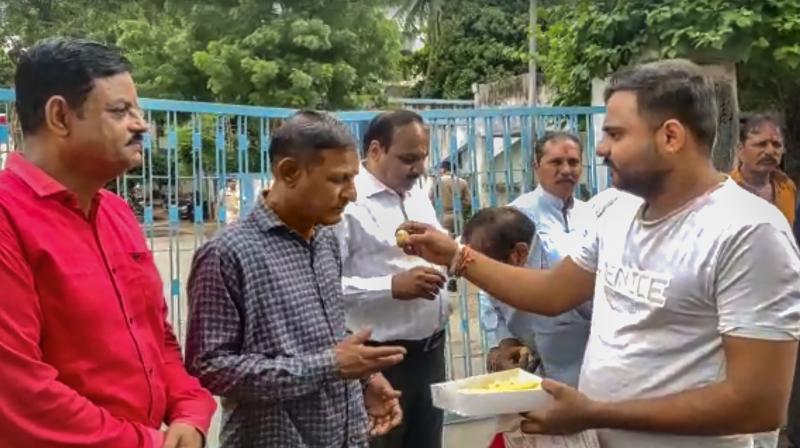 A man offers sweets to people convicted for rape and murder in the Bilkis Bano case of the 2002 post-Godhra riots, after they came out of the Godhra sub-jail after the Gujarat government allowed their release under its remission policy, in Godhra, Monday, Aug. 15, 2022. (PTI)

The denouement is tragic and overlaid with cruel irony, underlying yet again the opening of wounds in carefully nurtured fashion through state inaction — and frequently action — which is usually cheered on by fanatical gangs that appear to have a free pass, liberated from any constraint by the law and order authorities, and not infrequently viewed through a Nelson’s eye by elements in the judiciary.

The 11 men convicted for life in the case of the gang rape of Bilkis Bano, a young woman who was then five months pregnant, and the cold-blooded murder of 14 of her relations, including her three-year-old daughter, were set free, of all days, on Independence Day. Rapists and murderers, among them a head constable of police, were released from prison as a part of a policy of remission of jail terms to mark the officially proclaimed “Amrit Mahotasav” attending on the 75th anniversary of Independence.

When the released convicts walked out of jail, they were greeted outside with sweets and celebration. In today’s atmosphere it is not hard to guess who or what sorts of organisations might be in the background feting criminals whose grisly actions of 2002 must meet every criterion that goes into the making of the “rarest of the rare” that judges are sometimes called upon to consider.

The evening celebration made up the remains of the day which began in the morning at the Red Fort in the nation’s capital from where Prime Minister Narendra Modi informed the country that his heart “ached” when the dignity of women was taken away and when they were treated unjustly. We may only speculate if, upon getting the news of the guilty being released, the PM subjected the chief minister of Gujarat to a grilling.

The Bilkis Bano case was among the most hair-raising of the many despicable episodes that occurred during the communal carnage of February-March, 2022 in Gujarat, when Mr Modi was CM. The bodies of those killed had been mutilated, post-mortem. The skulls had gone missing. This looked like a clear conspiracy on a mega- and high-level-scale to erase evidence and prevent identification. The nation’s conscience was shocked. Bilkis Bano, who survived, knew the criminals. She received death threats and moved house 20 times in two years to dodge her hunters. The Supreme Court ordered a CBI investigation and the trial to be taken out of Gujarat and to be held in Maharashtra, such was the vicious atmosphere in Gujarat. A special CBI court gave life terms to the guilty. This was upheld by the Bombay high court.

To celebrate the “Azadi Ka Amrit Mahotsav”, the Centre issued guidelines to release large numbers of prisoners across the country. This seemed a good idea. Roughly 75 per cent of those in our jails are undertrials, and are in most cases poor people, held for petty crimes. Freeing them would be giving them back their dignity. In any case, many would have already been in jail much longer than the sentence they may have been given if they were convicted.

But the Centre’s guidelines excluded from the remission scheme prisoners serving term for heinous offences and those imprisoned for life. The Gujarat government chose to overlook this. It must be asked why. Is it because state elections are coming up and communal embers can be stoked by setting certain kinds of prisoners free?

In law, those sentenced for the whole of their natural life cannot be considered for release even if they have been in jail for 14 years. And yet, the Jail Advisory Committee that recommended the ending of the jail term for the convicts in the Bilkis Bano case was chaired by the district magistrate. The district judge and the police superintendent were members. These officials need to be questioned. And the matter cannot be left to languish at the district and the sub-jail level.