AAP, with two states under its belt, has in a way surpassed all other regional parties, which could not manage this feat 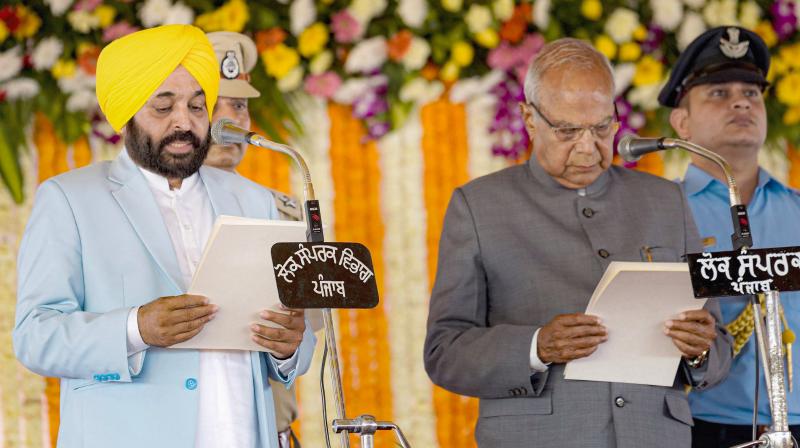 With his swearing-in as chief minister of Punjab at Bhagat Singh’s ancestral village Khatkar Kalan, Aam Aadmi Party leader Bhagwant Mann has brought into being the AAP 2.0; a phenomenon sui generis in Indian politics and one which fuses idealism with hope, which nonetheless has a foundation more pragmatic in approach, more tuned to realpolitik.

As Mr Mann was administered the oath of office and secrecy by Punjab governor Banwarilal Purohit, in the presence of the party supremo and Delhi CM Arvind Kejriwal, following the AAP’s landslide win with 92 seats in the 117-seat Legislative Assembly in the recent elections, it simultaneously meant the end of the duopoly of the conventional parties, the Congress and the Akali Dal and the start of a new phase for the most ambitious of start-ups in our national politics.

The 48-year-old Mr Mann, who spoke of achieving a Punjab of Bhagat Singh’s dreams, and of turning around the situation of the state and shaping it like Delhi, has got off the new government to a good start. His appeal to his own newly-elected MLAs to abstain from the trap of arrogance and to respect those who did not vote for their government equally was both reconciliatory and put the focus where it belongs — good governance.

By reiterating the primal issues of education and healthcare, where the AAP has promised a turnaround and to solve the problems of unemployment and agricultural distress, new Punjab CM Bhagwant Mann has given us all a new bout of optimism, of how a party of several political amateurs and dilettantes, many of them very young, and a good number of them from disadvantaged classes, can be a good solution to the problems, of which they were themselves a victim.

There was an underlying urgency to get to work, when Mr Mann said “...we have no time to waste... we have wasted 70 years...” His government would, undoubtedly in times to come, be under tremendous pressure to deliver on its ambitious and even audacious promises. But AAP operates on such an audacious axis, which continues to be the reason it endears itself to people in places where the level of cynicism with conventional politics is high.

The venue was decked with yellow, the colour of the “basanti” revolution, a colour that many believe will be now the first among equals to challenge Mr Narendra Modi’s saffron.

The AAP, with two states under its belt, has in a way surpassed all other regional parties, several of whom are several decades old, which could not manage this feat. Even if the Lok Sabha seats of Delhi and Punjab combined are only 20, the AAP, not defined by a language or region like the southern regional parties like the DMK, AIADMK, YSRC, TRS or TDP, or West Bengal’s TMC or Maharashtra’s Shiv Sena, can spread and grow anywhere.

Any startup that survives its first seven years, statistics point out, has a life ahead. Its ideas are firmly accepted and its success is undeniable. Will it manage its growth plans ahead to become a unicorn? Either way, it would be India’s most fascinating political story to watch out for in the future.