In the face of terror, avoid partisanship

In Srinagar, his remaining two observations betray a lack of familiarity with the ground realities. 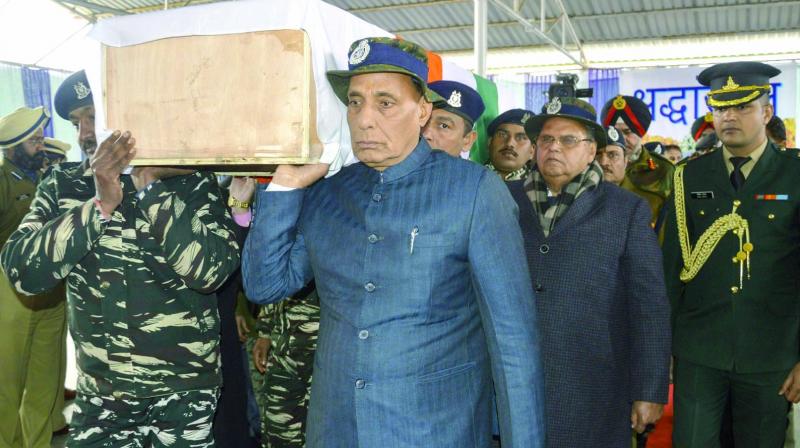 The all-party meeting chaired by Union home minister Rajnath Singh in New Delhi on Saturday, to take stock of the situation arising out of the Pulwama terrorist attack on a CRPF convoy on Thursday, appears to have been a routine and barren affair. It was noteworthy for the absence of a proper discussion on what the home minister’s initial assessments were after his trip to Srinagar on Friday, and discussions with top security officials and the state governor. The resolution passed at the meeting was essentially a reiteration of the condemnation of terrorism, and solidarity expressed by the Opposition parties with the security forces and the government for any retaliatory action that may be contemplated.

A caveat may be entered at this stage, however. Since the Lok Sabha polls are fast approaching, retaliatory action nearer the polling date is apt to be misunderstood as a partisan exercise in the event it is successful. If there are snags, the government’s opponents may be drawn into a posture of criticism. Either way, the national solidarity being expressed at the present juncture may come under a cloud. Every care needs to be taken to avoid this pitfall.

In his media interaction in Srinagar, the home minister made three key points. In view of disturbing news from Jammu over communal action by groups seen as close to the ruling party, he had been categorical that such activity must stop forthwith in order to project the nation’s unity in the face of the worst single incident of terrorism in Kashmir.

An assurance from the home minister at the all-party meeting that all communal elements would be dealt with severely would have bolstered the sense that the country is one in dealing with terrorism and any external threat. This was all the more necessary since curfew was clamped on Jammu for the second consecutive day on Saturday in view of untoward events continuing to occur. But Mr Singh missed the opportunity.

In Srinagar, his remaining two observations betray a lack of familiarity with the ground realities. He hinted that security being given to separatist leaders could be withdrawn. He didn’t pause to think why the Hurriyat leaders were given security in the first place. They are Indian citizens and an integral part of the political landscape. Should they come to harm, especially someone like the Mirwaiz, who is institutionally the Valley’s chief priest, there could be a public backlash with negative implication for the security situation.

Lastly, the home minister suggested banning all civilian traffic when the security forces' convoys move. As convoys move all the time, this can lead to considerable public disaffection and would psychologically bring back the militancy years. The CRPF convoy came under attack, it needs to be remembered, because laid-down protocols were not observed, and not due to the movement of civilian vehicles.