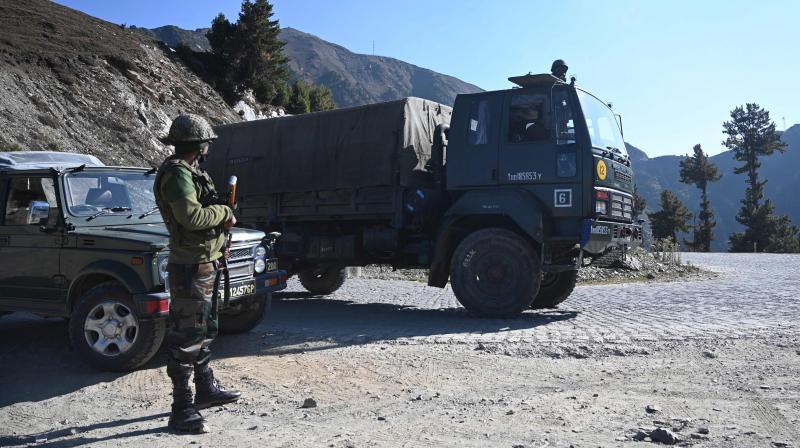 Indian Army soldiers stand guard near Nastachun pass, also known as Sadhana pass, about 8 Km from the Line of Control (LOC) in the district of Kupwara. (AFP)

So frightening has the monster of social media grown that it is causing serious concern in responsible quarters about the cohesiveness of our Armed Forces. This was recently conveyed in an open letter to President Ram Nath Kovind by more than one hundred veterans from the Army, Navy and the Air Force. The retired personnel, including former Chiefs, have urged that action be taken against fake social media posts that spread divisiveness within the forces on the religious basis.

Social media posts have spread the canard that a “Muslim Regiment” of the Army had to be “dismantled” when it refused to take up arms in the 1965 war against Pakistan. The truth is that such a regiment never existed. But social media posts seek to exploit the ignorance of the people, and their gullibility, when they circulate false, malicious, communal propaganda.

Since such posts are not sent out by stray, well-meaning but ignorant individuals, but typically by tens of thousands of organised foot soldiers of hate squads that occupy the Internet highway, it is time the government stepped in with alacrity to punish those who attempt to sow discord and mistrust within the Armed Forces.

At a time when our forces are busy dealing with the twin menace emanating from Pakistan and China, these cyber armies with their disturbing agenda may, sometimes even unwittingly, have become instruments of psy-ops (psychological operations) of forces hostile to India.

In India’s Armed Forces, soldiers of all faiths have distinguished themselves, and they are not grouped on a religious basis but fight in multi-class formations in the singular cause of defending this country. The example of Havildar Abdul Hamid, who was posthumously awarded the Param Vir Chakra for his gallantry against the Pakistan Army in the 1965 war, is of course legendary. But there are so many others. The antecedents of those posting about the so-called “Muslim Regiment” must be examined and suitable punishment awarded quickly.