France’s Cup of Joy, happiness all around

Open and attacking football under a generally conservative coach Didier Deschamps brought its rewards for a very young team. 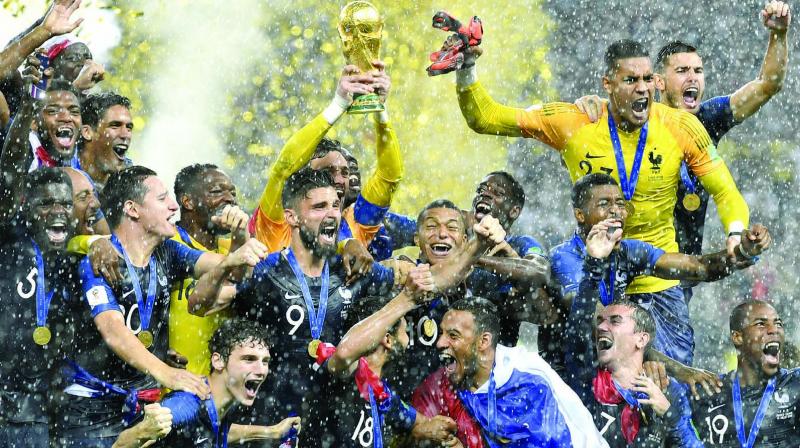 French goalkeeper Hugo Lloris lifts the trophy after France won 4-2 in the final against Croatia at the 2018 football World Cup in Moscow. (Photo: AP)

Sport is a catalyst that brings people together. France may be another prosperous Western European nation to win the World Cup, but it was the multi-cultural identity of its largely non-white team that was on display in an exciting, goal-filled final. While it wasn’t another David versus Goliath contest, even the loser, Croatia, went away with a sense of fulfilment at having come that far. Croatia’s wistful thoughts over what might have been — if not for an own and a debatable penalty ruling allowing its rival to hold the edge 2-1 goal-wise at the interval even though the intrepid frontline had thoroughly dominated favourite France. The fearless, sprinter-like talent of prodigy Kylian Mbappe saw France forge ahead to an unbeatable advantage as his pass to Pogba and then his own 25-yard screamer sealed the game in the second half. Open and attacking football under a generally conservative coach Didier Deschamps brought its rewards for a very young team.

The curious sight of Vladimir Putin shielded from the Moscow rain by a golf umbrella while everyone else, including Emmanuelle Macron, was soaked to the skin preserves the tale of a disdainful plutocrat who had, however, hosted one of the finest World Cups. The hosts’ warmth and the dispelling of Western media myths on life in Russia were eye-openers. Mr Putin’s building of 12 great arenas for $4 billion, in cities far from Moscow, made for grand showcasing of the world’s most popular game. The fears of hooliganism didn’t fructify and, ironically, took place only during champagne celebrations by the deliriously happy French people on the victory night of Hugo Lloris and his men. If President Macron can draw sustenance from the feel-good kickstart for France, its image and its economy, Mr Putin emerges as the Russian strongman who opened up his land and its people’s hearts to sporting visitors.

The number of nations coming away happy from this World Cup made it a unique event in modern times, when complaints of discomfort and inconvenience are greater than tales of happiness and acceptance. England rose to dream again. Belgium finished its best as third despite going into the group of death by virtue of its preliminary group win against England. Japan did Asia proud in qualifying for the knockouts. A stoutly defensive host, Russia, made a never-before quarter-final appearance in which penalties were ordered before Croatia could advance. Along with defending champ Germany, who exited the quickest, South American giants Brazil and Argentina would have been the ones most disappointed as they had to pack off even before the serious last-eight action began. In conclusion, Deschamps put it in perspective saying talent alone doesn’t win a World Cup. Psychological and mental strength is vital too, he noted, as he became only the third player to win the World Cup as a coach too.