Opinion   Edit  16 Mar 2020  AA EDIT: Now that Farooq Abdullah is 'free', will Kashmir be back to normal soon?
Opinion, Edit

AA EDIT: Now that Farooq Abdullah is 'free', will Kashmir be back to normal soon? 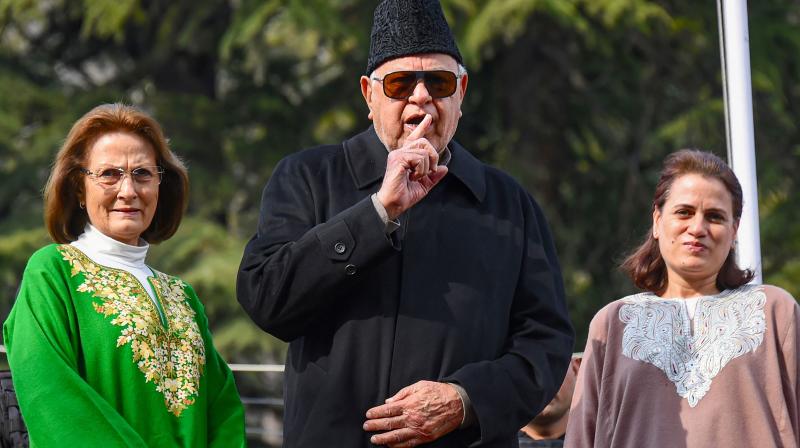 National Conference patron Farooq Abdullah with his wife Mollie Abdullah (left) and daughter Safiya Abdullah (right) speaks to the media after his detention under the Public Safety Act (PSA) was revoked by the Jammu & Kashmir administration on March 13, 2020. (PTI)

The release of National Conference patriarch and former J&K chief minister Farooq Abdullah from detention on Friday — a sudden but not wholly unexpected development as it had been hinted at for over three months in the context of New Delhi needing this expedient to navigate a respectable way out of the logjam in Kashmir into which it recklessly wandered in August when it whittled down Article 370 of the Constitution — is a welcome turn in events. After uncertainty and gloom, it makes positive political outcomes in J&K appear realisable.

A day after Dr Abdullah emerged free in Srinagar, Prime Minister Narendra Modi said that “at an early opportunity” his government would work with “all sections of the people” of J&K to realise the hopes of statehood — in effect making J&K’s recent status as a Union territory a shortlived affair.

The irony is that the PM’s remarks were addressed to a delegation of Kashmir’s just-launched Apni Party, a conglomerate of self-seeking renegades with little mass appeal brought into being through the Centre’s machinations as a “king’s party” in order to end the old era of Valley politics — dominated by the Abdullahs and the Muftis — and inaugurating a new one by pressing quislings into service.
Dr Abdullah’s release and the PM’s statement yield the surmise that the Narendra Modi government has just had an attack of realism. In that case, the effective shelf life of the Apni Party may be severely curtailed.

Dr Abdullah is in his mid-80s, and suffers from physical ailments. But he remains Kashmir’s most-admired leader. His release thus seems a symbolism of some magnitude — a gesture of goodwill and peace toward the people of the Valley, who until recently were sought to be reviled by the ruling BJP.

The National Conference president, after the end of his detention, indicated strongly in his public remarks that he will respond to political stimuli only when two other former CMs — his son Omar and the PDP’s Mehbooba Mufti — as well as dozens of other political figures are also set free. When these terms are met, life in J&K may be deemed to have returned to near-normal in the changed historical circumstance that has come into being after the extinguishing of Kashmir’s autonomy on August 5 last year.

Will the political spectrum of the Kashmir Valley readily or willingly accept the delimitation of Assembly constituencies in J&K before they become due in the normal course in order to satisfy the long-held RSS-BJP agenda to create more seats in the Hindu-dominated Jammu region, thinking this will give the BJP an advantage? Will the Centre agree to hold Assembly polls this year as state polls (under the earlier dispensation) are held every six years in J&K?

It’s unlikely that NC or PDP will accept the political suzerainty of the fledgling Apni Party in an Assembly election. As such, will the BJP defer to the return of normal politics after freeing the remaining political leaders of Kashmir? If this happens, the international pressure on the Modi government may ease.