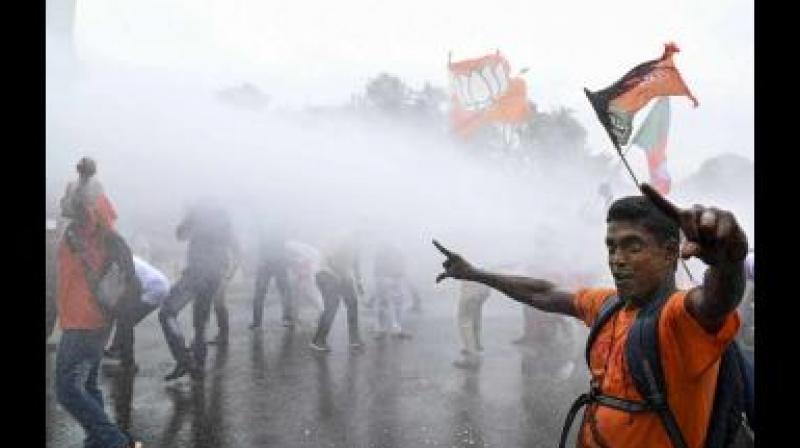 Security personnel use water canons to disperse BJP supporters from the Howrah Bridge during their 'Nabanna Abhijan' (March to Secretariat) to protest against alleged corrupt practices of TMC government, in Kolkata, Tuesday, Sept. 13, 2022. (Photo: PTI)

The violent protest march on the state secretariat in Kolkata mounted by the BJP from multiple locations simultaneously is of a kind not seen in a long time in West Bengal’s capital, which is no stranger to street-level militancy displayed by political outfits of different stripes.

In light of the visuals seen on television, the newspaper reporting and the eyewitness accounts of journalists that couldn’t find their way into print due to space constraints, it seems a stretch to sustain the claim that the police had without provocation cracked down harshly on a peaceful demonstration held by the state’s leading Opposition party to protest against “corruption” in the running of the state’s affairs by the ruling Trinamul Congress led by chief minister Mamata Banerjee.

A photo in a prominent daily shows a “peaceful” protester violently kicking a helmeted police officer sprawled helplessly on the pavement. It turns out he is an assistant commissioner of police who has been very seriously injured. Demonstrators set fire to a police vehicle, displaying hooliganism with a sense of abandon. Bricks and other missiles were hurled freely. It would have been dereliction of duty on the part of the law and order authorities if they had not stopped the violent protesters from reaching the secretariat. Regrettably, some leading BJP figures have also been injured, besides the police on duty.

Instead of letting loose retaliatory violence by TMC cadres in keeping with the unfortunate culture of political violence in West Bengal, the chief minister would do well to appoint a commission of inquiry by a sitting judge of the Calcutta high court to focus on the violence aspect that was so conspicuous. In such a case, the commission would need to turn in its report in a matter of weeks rather than months in order to be meaningful.

Alleged -- that the Opposition party imported large numbers of cadres and hooligans from neighbouring states for the so-called peaceful march. This is needed all the more in light of dire warnings issued by senior BJP members in Odisha that a Kolkata-style march would also be held in that state to oust the Naveen Patnaik government and to fulfil the party’s aspiration to double its tally from the state in the next Lok Sabha polls. Such a threat can hardly be brushed aside.

For a variety of local reasons, the BJP did strikingly well in the last Lok Sabha polls in West Bengal, bagging 18 of the state’s 42 seats. This led it to believe it could win the 2021 Assembly election, whose result was an anti-climax for the BJP.

Evidently, the saffron party is smarting under the crushing defeat a year ago. It had thrown its most powerful leaders, including Prime Minister Narendra Modi and Union home minister Amit Shah, into the campaign but the outcome was disappointing.

After the walloping, the ruling party at the Centre is evidently seeking to keep the morale of its rank and file in the state boosted through high-profile actions even if these stretch law enforcement to the limit. This is a pity. A problem with the West Bengal BJP is a paucity of credible local leaders who keep political standards high.

Desperate actions are a recipe for lawlessness.