Team India aren’t dullards any longer, who foxed teams with designer pitches at home, and can set many more records. 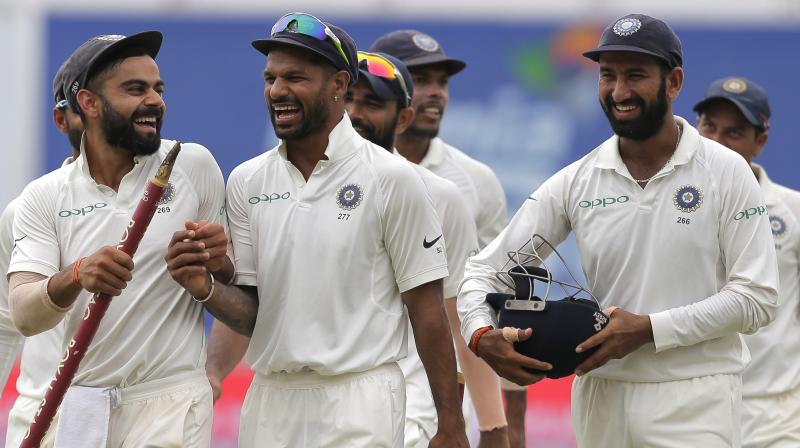 Virat Kohli, left, shares a laugh with teammates as they leave the ground after their win over Sri Lanka in the third cricket test match in Pallekele. (Photo: AP)

Virat Kohli becomes the first skipper in India’s 85-year Test history to lead his team to a series whitewash away from home. It was with another emphatic innings victory that Team India decimated Sri Lanka for a 3-0 win. A very weak home team may have been complicit in this abject surrender, but given that it’s the eighth series win on the trot against all comers, it’s clear Kohli has taken his team’s Test performances to a higher plane. He leads a team rated well above its rivals on the computerised Test rankings, though it’s true all wins have come in home conditions, those resembling them in Asia and on the Caribbean’s tired pitches. The greater challenge will be to win in Australia and South Africa, where India is yet to win a Test series.It may not be true any longer to claim Indian teams lack the killer instinct, but the squad did let down its fans by botching up the Champions Trophy final against Pakistan last summer. Traditionally a strong combination of wristy batsmen and clever spinners, Team India’s strengths have grown is in pace bowling, athletic fielding and a gung-ho attitude young players like Hardik Pandya have brought. The new wave of attacking players found an ideal leader in Kohli, who has been a pathbreaker in the modern mould of outright aggression. Team India aren’t dullards any longer, who foxed teams with designer pitches at home, and can set many more records. Of course, it must pick up in the ODI and T20 formats, in which it’s not as formidable as in the longer version.