What did the ‘mother of all bombs’ achieve?

The US hasn’t provided any data on how many ISIS fighters were killed by the MOAB. 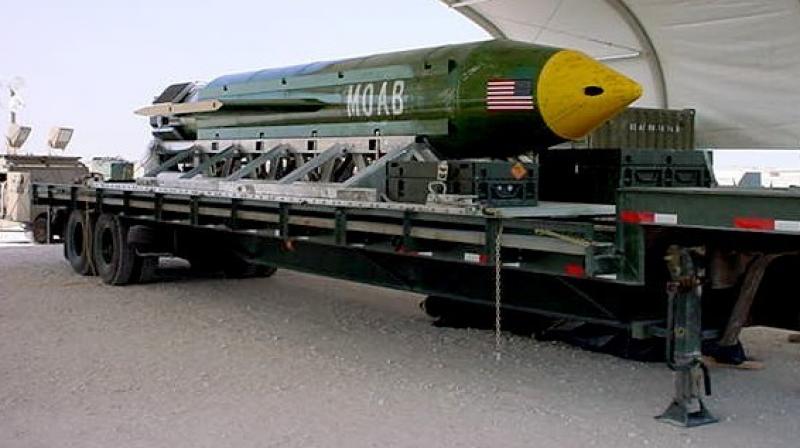 It is hard to get away from the feeling that America’s massive bomb attack on some caves and underground tunnels presumably held by Islamic State or Daesh (ISIS) fighters in remote Afghanistan — in the faraway Achin district of Nangrahar province, touching Pakistan — has the strategic purpose of psychologically cowing Russia, China and Iran in a region from which US and Nato forces have practically withdrawn militarily, now keeping only a residual contingent.

The 20,000-pound Massive Ordnance Air Blast (MOAB), popularly called the “mother of all bombs” because it is the most powerful non-nuclear weapon in the American armoury, dropped on Thursday night, has never been used before. The psychological impact of its use can said to be similar to that of the use of a weapon of mass destruction. Also, as former Afghan President Hamid Karzai said in a tweet, quoted by the New York Times, the US was testing its unused ordnance in Afghanistan (much as it had done in Iraq during the first Iraq war).

After the recent missile attack by US forces in Syria following an alleged chemical attack by the Bashar al-Assad government against its own people, it is not unlikely that unleashing the earth-shattering bomb in Afghanistan is also intended to be an object lesson for the wider West Asia theatre in a classic case of the conveying of imperialist ambitions under a new US President.

An unprovoked attack of such huge magnitude cannot conceivably have a straightforward military objective. ISIS fighters are not running rampant (as the Taliban used to once). Nor is Daesh a political threat of the magnitude that Taliban, militarily and diplomatically nurtured by Pakistan, once was to Kabul and to US and Nato military forces in Afghanistan, although ISIS is said to have grown.

The US hasn’t provided any data on how many ISIS fighters were killed by the MOAB, or how many civilians lost their lives as collateral damage, though Afghan officials said Friday that 36 militants were killed. Besides, it’s too early to know if any environmental damage, with a long-term impact on water and on human and plant life, has been caused.

In Afghanistan, the public reaction to the bomb attack could have unsettling consequences. There was always a suspicion why the US, that has the world’s most powerful military, did not end the Taliban problem after it ousted the religious zealots from power, and subsequently practically condoned Pakistan for nurturing the Taliban back to health. With the MOAB attack, the sense of sovereignty being violated is likely to grow in Afghanistan along with anger against Washington. The Ashraf Ghani-Abdullah Abdullah government, a creation of the US, could encounter serious difficulties. India, a close friend of the Afghan people, must watch the situation more closely.