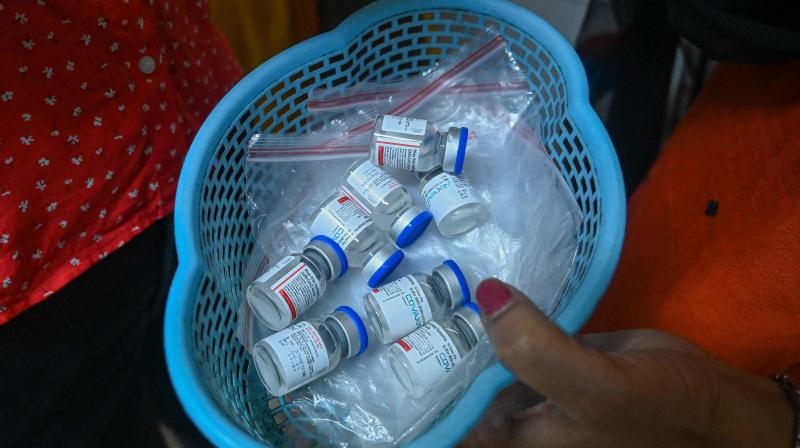 A health worker carries vials of the Covaxin vaccine against the Covid-19 coronavirus at a health centre in New Dehi. (Photo: AFP/File)

The search for a vaccine for children against Covid-19 could end soon with the subject expert committee (SEC) of the Central Drugs Standards Control Organisation (CDSCO) recommending emergency use authorisation (EUA) for the indigenously developed Covaxin for those aged between two and 18. Once the Drugs Controller- General of India (DCGI) gives its final nod, it would become the first vaccine globally for the use in children of age two. The two-dose vaccine will be administered with a gap of 28 days, compared with 4-6 weeks for adults, experts say. The manufacturers of Covaxin conducted phase 2 and phase 3 trials on children in the age groups of two and six, six and 12 and 12 and 18 and submitted data to CDSCO in September. The final approval would be granted after assessing these data.

India has been known for its vaccine manufacturing capabilities but has not been into developing new ones in a big way. The making of Covaxin by Bharat Biotech with the help of government agencies Indian Medical Research Council (ICMR) and the National Institute of Virology (NIV) proved the mettle of the scientific community in the country, and as such, it was a promising development.

Covaxin has played a pivotal role in India’s vaccination programme against the pandemic along with Covishield, developed by Oxford University and manufactured by Serum Institute of India in India. It may, however, be remembered that the World Health Organsiation (WHO) is yet to give its EUA to the vaccine; lack of adequate data is said to be the reason why the world health body remains undecided on the indigenously made vaccine, though 10 months have passed since Indian authorities okayed its emergency use in India. Most nations do not consider vaccination with Covaxin enough to consider people to be fully inoculated with no WHO approval.

Governments as well as people who have been lucky to have escaped or survived the virus have been looking up to vaccines as the most important tool in the fight against the microorganism. Scientists were successful in deciphering the genetic code of the virus quickly and began the process of making a vaccine. It still took months for many nations, including those that are scientifically advanced, to complete the scientific processes testing their safety and efficacy, among other parameters, before getting the approval of the agencies concerned. It is to be noted that the due process was followed before the grant of approval despite the tearing hurry and pressure from governments all over the world.

It is true that lakhs of children have returned to school last month and this after remaining confined to their homes for about 18 months. Vaccinating them would be a reassuring process for the parents who are in the dilemma whether to send them to school or not, what with the warnings of a third wave filling the air. It is the responsibility of the government to ensure that the vaccines that are administered to the children meet all the scientific requirements, and their data is assessed as per the norms the international community would also approve of. Nothing less is enough.