India is a constitutional democracy and not a banana republic 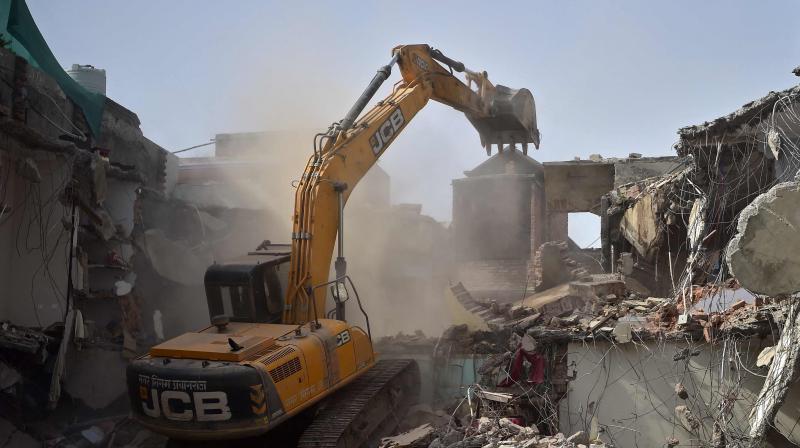 A bulldozer is being used to demolish the illegal structures of the residence of Javed Ahmed, a local leader who was allegedly involved in the recent violent protests against Bharatiya Janata Party (BJP) former spokeswoman Nupur Sharma's incendiary remarks about Prophet Mohammed, in Allahabad on June 12. (AFP)

The bulldozer raj that the Yogi Adityanath government in Uttar Pradesh launched in its first term and pursues in the second, so vigorously that it is currently being replicated faithfully by many BJP-governed states, is illegal, unconstitutional and undemocratic. It must be stopped forthwith.

The latest in the series of house demolitions in Kanpur ostensibly targeting those participating in protests against the hate-filled remarks of BJP spokespersons against the Prophet shows blatant disregard for the rule of law.

With no legal backing, the government claims that it demolishes the houses and buildings built without proper documents and after following the due process of the law. This would include issuing of a notice to owners.

It has now come to light that the state government had issued no notice to the legal owner before demolishing the house of New Delhi’s Jawaharlal Nehru University student and activist Afreen Fatima on Sunday. The government’s case was that the house belonged to her father, who has been named as an accused in the recent violence, while her mother is the owner of the building. Reports suggest the government served a pre-dated notice to him.

Yet the primary question is not whether the notice was served on the rightful owner. It is the legality of the very act that is questioned. India is a constitutional democracy and not a banana republic. The Constitution stands guarantee to the people’s right to live with dignity in this country and stands in the way of the mammoth government machinery riding roughshod over the citizen.

Housing is one of the rights under the UN Declaration of Human Rights to which India is not only a signatory but a meaningful contributor in its drafting stage. Indian law mandates that eviction of people from an illegal structure must follow procedure. But the governments in Uttar Pradesh, Madhya Pradesh and Gujarat, and the municipal bodies in Delhi, have not done the same. They act as if they are prosecutor, judge and jury of kangaroo courts that they set up to punish their targets.

It is a small mercy that they book their victims under some sections the Indian Penal Code. The police officers most of whom belong to the Indian Police Service and are mandated to uphold the law have no qualms providing lame excuses for their actions which go against the law in letter and spirit as well.

The disinterest of the courts, which have a responsibility to ensure that the citizen’s rights are protected and the writ of the Constitution runs in every part of the country, in the matter is highly regrettable. The Supreme Court did come to the rescue of the people in Jahangirpuri in the nation’s capital but showed no interest in barring all governments with going ahead with a process which turns the very idea of rule of law on its head.

It is time for all those who have a stake in the survival this nation to come together and raise their voices against this barbaric practice. Unless it is stopped now it will run over the very idea of India.