Unnao, Kathua signs of the arrogance of power

The PM reportedly had to take a helicopter ride in order to duck demonstrators. 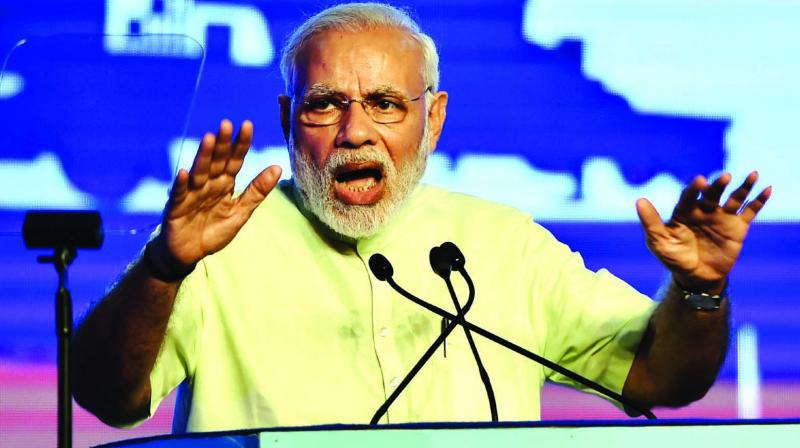 Prime Minister Narendra Modi speaks during the inauguration of the 10th edition of India’s mega defence exhibition “DefExpo 2018” at Tiruvidandhai, on the outskirts of Chennai. (Photo: PTI)

It must be a new experience for Prime Minister Narendra Modi to be greeted with protests and be shown black flags on Thursday when he arrived in Chennai for the Defence Expo at Tiruvidanthai, 40 km away. The hashtag #GoBackModi was all over Twitter. The PM reportedly had to take a helicopter ride in order to duck demonstrators.

The marker of sharp protest against Mr Modi personally has come when he is about to complete four years in office. That makes it early in his career as PM, relatively speaking.

It is notable that the adulation the PM has been used to slipped into a sense of outrage without notice of the coming change of rhythm. Although the rising tempo of dissatisfaction against the Modi government had begun to manifest itself since about the middle of last year — the campaign for the Gujarat Assembly polls made this plain — it was widely felt at the personal level Mr Modi remained well liked enough. The Chennai protest suggests things are now changing.

The protest against the PM was mounted because his government has blatantly avoided, for political reasons to do with the coming Karnataka Assembly elections, forming the Cauvery Management Board in spite of an order by the Supreme Court to do so by a specified date in March. Water is naturally a big issue for farmers everywhere.

Mr Modi and his party would be making a mistake if they think that their stakes in Tamil Nadu are not high enough for them to worry over rising decibels in Chennai. If our rulers look around, they will discover that farmers, unemployed youth, and an economy sliding on a steady basis are causing all-round despair.

In addition, the dalits are rising. The communal temperature is high. Social equations are fragile in the extreme. Kashmir is in a state of crisis as never before since the end of the militancy in the early 1990s. But none of this has made the ruling block humble. Unnao and Kathua are but signs of the arrogance of power.

Speaking in the context of the PDP-BJP alliance government in Kashmir, chief minister Mehbooba Mufti’s brother Tasadduq Mufti, the state tourism minister, has been reported as saying: “Today the threat is that while we are in control, we are no longer trusted.”

Mr Modi and his men would be wise to read this as a description of the wider canvas. But are they? On the day that black flags were shown to the PM in South India by the Opposition parties, Mr Modi led the BJP’s nationwide dharna to protest against Opposition parties. This has to be a first for any governance system. Can Nero afford to fiddle while Rome burns?