In the absence of pellet guns, the renewed use of live ammunition can only be cause for concern. 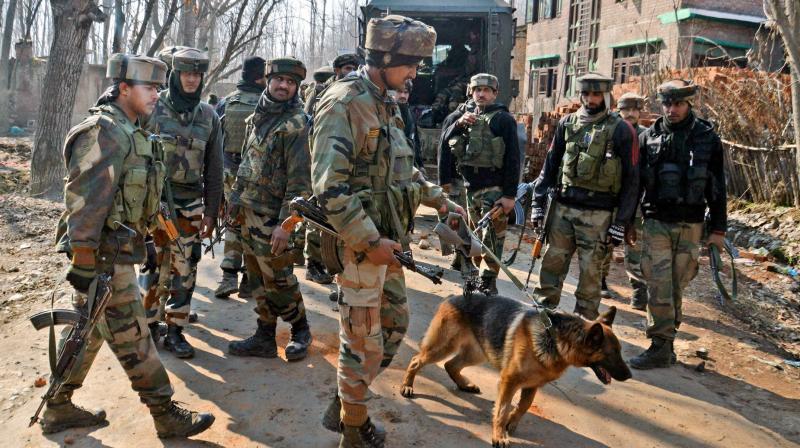 Army personnel along with a sniper dog move towards the house where militants were hiding during an encounter at Frisal area of Kulgam district of south Kashmir. (Photo: PTI)

The raid by the Army on a house in the Kulgam area of south Kashmir, in which four militants, a civilian and two jawans were killed on Sunday, shows the security situation in the Valley continues to be fragile. Militants being holed up inside a house is not a surprise. But the worrying part is that the local population came out in protest against the security forces’ action, and reports from two hospitals suggest a dozen civilians sustained bullet injuries. While more confirmation of these details may be required, this suggests in the first instance that the use of pellet guns may have been discontinued by the security establishment. These had caused injuries to the eyes, and there were also cases of blindness resulting from the action of the security forces against protesting civilian mobs in the Valley late last year following the killing of militant commander Burhan Wani.

In the absence of pellet guns, the renewed use of live ammunition — if the hospital records quoted in the media are correct — can only be cause for concern. Fortunately, there were no deaths. Else, the situation could have turned explosive.

Still, the civilian protests after anti-militant operations is indicative of the public mood against the government, which apparently continues to be hostile. The most proximate cause of this is that there has been no political initiative on the government’s part after the months-long Valley-wide protests that erupted in early July after Wani was killed in an encounter during a raid on a house in an orchard in south Kashmir.

This part of the Valley appears to be in the grip of militant activity. Home-grown militants have begun to once again fill the ranks of not only the Hizbul Mujahideen, a local Kashmiri group, but also the Lashkar-e-Tayyaba, whose headquarters is near Lahore in Pakistan. According to official estimates disseminated in the media, in recent months about 60 local youth have been drawn to the militant outfits. Such tendencies will be hard to quell in the absence of carefully designed political steps taken by the government. The Mehbooba Mufti government is evidently hamstrung in the absence of an understanding between the PDP and the BJP, the ruling coalition partners in J&K, which seem to be on differing wavelengths.

Ms Mufti’s PDP, which appears to have courted great unpopularity after last year’s protests, seems to be in the process of trying to recover lost ground within its constituency in Kashmir. The BJP, on the other hand, appears insensitive to local sentiments in the Valley, and instead prefers to appease its constituency in the state’s Jammu region. The coalition partners need to patch up urgently before concerted political steps can be taken in Kashmir.