In Naxal belt, faith in democracy lives on

In India’s Naxal heartland, a major exercise in democracy came through reasonably well on Monday, with people shedding fear to cast their ballots. 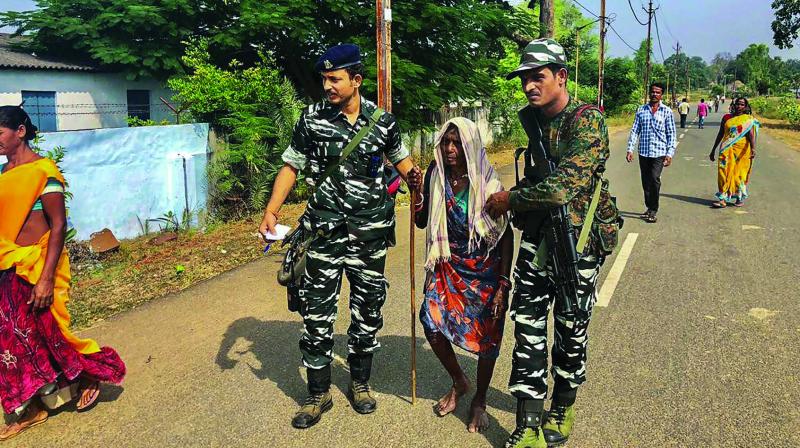 In India’s Naxal heartland, a major exercise in democracy came through reasonably well on Monday, with people shedding fear to cast their ballots. Younger voters and women appeared to have come out in large numbers.

The final polling tally in the first of the two phases of the Chhattisgarh Assembly elections appeared to be over 70 per cent, according to the Election Commission. This is just above the 67 per cent recorded in the same belt five years ago, in 2013. The concerted bid by the Maoist guerrillas to derail the election exercise has clearly not succeeded, giving the idea of democracy a thumbs-up.

If we try a larger generalisation, we can say with some justification that while political leaders are regularly seen to be failing the idea of democracy in India through their manifest corruption and hunger for power, ordinary people are doing what they can to nurture democracy by showing resilience and physical courage.

The Election Commission deserves to be congratulated for making tight arrangements which would have, no doubt, given people some sense of security in the face of the most difficult odds.

According to news reports, 300 IEDs, which could have caused huge blasts, were unearthed in the last 10 days before polling day. This speaks of the scale of preparation by the inveterate opponents of democracy. Approximately one lakh security forces were deployed.

This bears comparison with the deployment levels in the Kashmir Valley and underlines the gravity of the situation, which the government and the ruling party routinely seek to play down by appearing to falsify facts in order to give the impression that the Maoist menace has been overcome by an ever-watchful government.

But our forces have a better appreciation of the situation than messy politicians. A BSF sub-inspector lost his life in the evening before polling began. A couple of jawans had been killed just days before. A Doordarshan cameraman also lost tragically lost his life while on pre-poll coverage duty in Chhattisgarh. In such a situation, indifference to the polling exercise by the people would not have seemed unnatural. But they held the line.

To vanquish the Maoist insurgency, which has been entrenched over decades due to a variety of factors, including geographical location in the middle of extensive forested terrain, a multi-faceted governmental approach is needed. Neither military means alone nor delving into the so-called root causes approach (which implies the improving of socio-economic conditions of the life of the poor) by itself can produce the desired results.

A wise government would approach even political rivals to show common cause in dealing with Naxalism, which reflects a bankrupt ideology but has an apparent pull on many. The triumphalism on display is the last thing we need.