IPL #12 was good for cricket’s image

There is no arguing against a 4-0 verdict as Mumbai Indians rose above three-time champions CSK to win a fourth IPL. 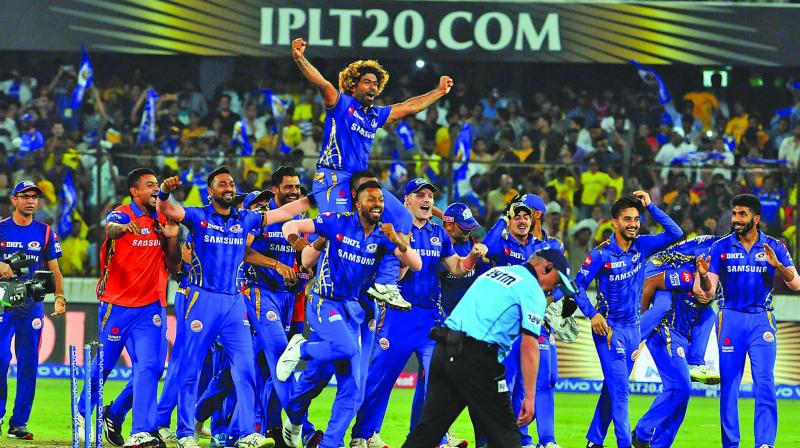 An exhilarating final in which any of three results was possible till the very last ball was the perfect advertisement for the thrills of instant cricket. IPL’s 12th season, as controversial as it was full of classic contests, has gone a long way to beefing up the image of Indian cricket as well as adding to the valuation of the cash-rich premier league, one of the world’s leading sports properties. Electrifying as the game was for the winner and heartbreaking for the loser, what the season established was that the two best teams came through to play a see-sawing final. There was a century of talking points in an error-filled game affected unusually by a large dose of nerves even in seasoned players of both teams and the umpires too. Even then, the battle offered rollicking entertainment and in the end cricket was the winner.

While Mumbai Indians and Chennai Super Kings were the clear leaders in the pack of eight, Mumbai had established their supremacy in beating CSK thrice in the competition, twice in the preliminary league and once in the first qualifier. There is no arguing against a 4-0 verdict as Mumbai Indians rose above three-time champions CSK to win a fourth IPL. What could be considered more heartening was the emergence of the refurbished Delhi Capitals, whose youngsters Rishabh Pant, Sheryas Iyer and Prithvi Shaw presented their best credentials. A clutch of international players did very well indeed, but the success of young Indians getting IPL exposure made the day for Indian cricket. A few teams were really unlucky, while bottom-rung RCB finished only one point off the 12 points with which Sunrisers Hyderabad even made it to the playoffs. Another IPL edition has shown the awesome striking prowess of today’s batsmen, but it was teamwork rather than individual performances that made the difference.

The umpiring was well below par, and something has to be done about it if those willing to wear the coat aren’t to face such erosion of confidence that they repeat their errors all the time. The spirit of cricket was breached far too often in IPL-12. It began with the “Mankading” of Ros Buttler by Ravichandran Ashwin, while Mahendra Singh Dhoni plumbed the depths as he marched on to the field to remonstrate with the umpires on a judgment call. The levels of exulting and triumphalism in sending off batsmen is reaching distressing levels, and seem to be competing for television time with soccer events. It must be seen how far worry over IPL workloads and nervous tension over cricketers who will soon play in the World Cup is justified. It is, however, a fact that IPL has shown the way to rediscovering talent that may have been ignored in the past, and some nations will be better off for seeing that evidence in another super-rich, power-packed, high-stakes T20 season.