Congress must switch its focus to the basic issues

In the recent work style of the Congress, the campaigning zeal of 2017-18, spearheaded by party chief Rahul Gandhi, appears to be absent. 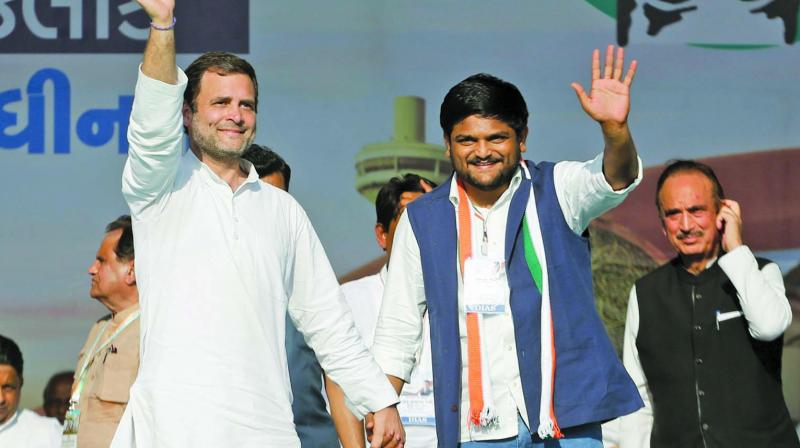 Patidar leader Hardik Patel with Congress president Rahul Gandhi as he joins Congress during a public meeting in Gandhinagar on Tuesday. (Photo: PTI)

Just before the first phase of polling for the Lok Sabha election, by holding its Working Committee meeting in Ahmedabad and staging a public rally near Gandhinagar, the Gujarat capital, the Congress has evidently tried to raise the level of challenge to Prime Minister Narendra Modi on his home turf.

This is fine as symbolism, but the Congress has work to do to regain the spirit of 2017, when it was able to mobilise sufficient momentum to give the BJP a big scare in the Assembly election in Gujarat. As the parliamentary polls approach, several Congress MLAs in the state have switched to the BJP.

This is an old BJP method of demoralising the opponent before an election. The only means the Congress has to counter such an effort is to engage in mass mobilisation of voters around issues that matter to them in a basic way. The Congress failed to do this on the national level and has been distracted by other concerns.

Speeches by top party leaders, or criticism made by them of the ruling side, no matter how valid, are no substitute for appealing to citizens through matters that are of the greatest concern to them.

In the recent work style of the Congress, the campaigning zeal of 2017-18, spearheaded by party chief Rahul Gandhi, appears to be absent. Earlier this year, much was made of his charismatic sister Priyanka Gandhi Vadra formally entering active politics and being given charge of Eastern UP, with a view to mobilising voters through the personal connect she is thought to readily establish on the election trail.

Not much has been heard of Ms Vadra’s work in UP in terms of mass mobilisation, even if she has been working at getting the party organisation ready for the gruelling work that lies ahead.

In the public rally held in Gandhinagar after the CWC meet ended, Ms Vadra spoke as a member of the CWC — in her capacity as a party general secretary — for the first time, and appeared to leave a good impression. But still, the best one can say is that the Congress has miles to go.

Patidar firebrand leader Hardik Patel officially joined the Congress on Tuesday. As a charismatic young agitator, he has shown remarkable energy and capability. It’s to be seen how his presence helps the Congress take on the formidable electoral challenge it faces in Gujarat.

At the CWC meeting, the party gave the impression that it was returning to the issues of unemployment and farmers’ difficulties, which fetched it great dividends in three state elections last year, instead of playing the BJP on its turf of strident nationalism and loudly-orchestrated security concerns after Pulwama. This is sensible. Any party, after all, needs to play to its own strengths.