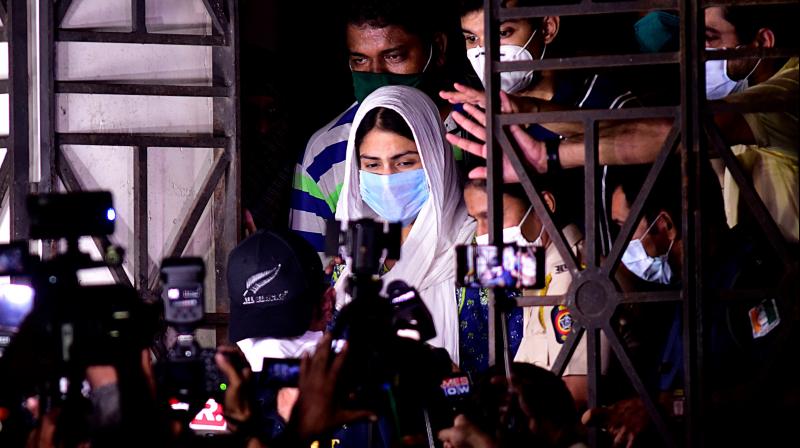 Bollywood actress Rhea Chakraborty (C) leaves the Enforcement Directorate (ED) office after being questioned in relation with the investigation of the suicide case of Bollywood actor Sushant Singh Rajput, in Mumbai. PTI Photo

The reprimand of the media by two high courts on Thursday asking it to restrain itself while doing its job is a wake-up call for the practitioners of the profession in the country.

While the Delhi court has asked the media to respect the sanctity of the lawful criminal investigation, the Bombay high court wondered why the electronic media comes under no government control.

The Delhi high court’s directive to Republic TV came in a plaint by Congress MP Shashi Tharoor alleging that the channel was portraying him as murderer in a case, which the investigating agency has concluded to be a suicide.

The court was unequivocal in its stand that there cannot be a media trial parallel to the process as established by the law. “The press cannot convict anyone or insinuate that he/she is guilty or make any other unsubstantiated claims,” the court ruled.

It rightly rubbished the channel’s claim that it had evidence with it and said “statements from here and there” do not make evidence.”

The Bombay high court was incensed at the way the media was chasing the suicide of Bollywood actor Sushant Singh Rajput as it heard a PIL, which said the reportage sought to malign the Mumbai police.

The courts cannot be suspected of attempting to gag the media. The Delhi high court insisted that it was not interested in gagging the media and only directed the editor and the channel “to be bound by the statement made on their behalf by their counsel”.

The Bombay high court gave the News Broadcasting Standards Authority (NBSA) to act on the petitions even while mentioning that it “has no teeth”.

Democracy sustains fair journalism. If the latter tries to exceed its brief, then the instruments of democracy, however weak they are, would try and resist it. It’s time the media realised it and restrained itself.