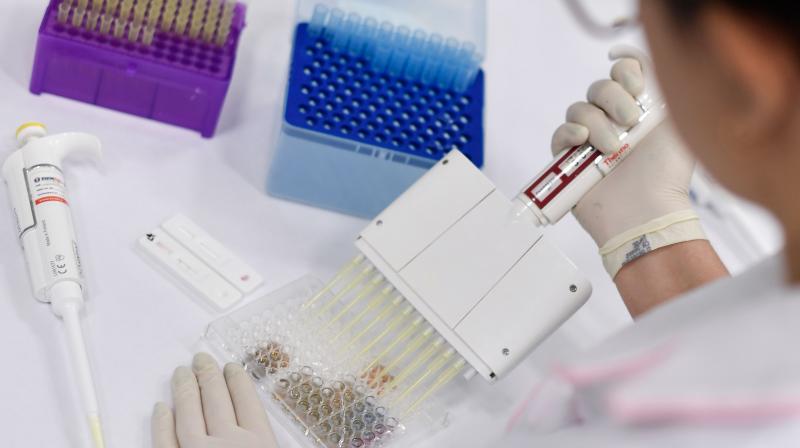 File photo of a researcher working on the development of a vaccine against the new coronavirus COVID-19, in Belo Horizonte, state of Minas Gerais, Brazil. AP Photo

The Covid-19 vaccine race has heated up, but one of its main participants — out of 141 in total — has taken a pit stop.

After a rap from the Drug Controller General of India for proceeding regardless, the Pune-based Serum Institute of India, too, paused its own adenovirus trials.

So now other frontrunners must have forged ahead, and they include Russia, China, the United States and Canada, although a majority of scientists see Sputnik V, allegedly put together with the help of research pilfered by Russian cyber-intelligence agents, as a rush job.

The spotlight is now back on Moderna Therapeutics which has a year-end launch tentatively lined up for its messenger RNA jab.

But the hype — surrounding T cells and spike protein and neutralising antibodies — can be a bit misleading.

At a time when the world is increasingly politically polarised, with epidemiologists and economists switching roles, as has been frequently complained of, this mad dash for the vaccine is actually being taken with a pinch of salt, and not only by evolution-deniers and anti-vaxxers.

The common man interested in protecting his home and hearth, for instance, without being led astray by red herrings, is also asking the valid question — did this race not begin as a profit ploy by Big Pharma?

Pertinently, the industry may well have been in cahoots with the government — as the discovery of a vaccine before November 3 might well boost US president Donald Trump’s chances in the election.
Closer home in India, there did emerge a parallel deadline — a controversy erupted over Bharat Biotech’s Covaxin after the Indian Council of Medical Research was reported to have been pushing for an August 15 launch.

Phase 2 trials of Covaxin are expected to start this week. In addition to Bharat Biotech, and Zydus Cadila, other Indian companies involved in the battle against SARS-CoV-2 are Biological E, based in Hyderabad, and Gennova Biopharmaceuticals, also in Pune.

Biological E is licensing the recombinant protein Covid-19 vaccine being developed at Baylor College of Medicine in Houston, USA, while Gennova is developing an mRNA vaccine in collaboration with HDT Bio of the United States.

There is no data yet for the efficacy of any vaccine for the coronavirus. How long they will work is also uncertain. The US Food and Drug Administration and the World Health Organisation have both put out a point estimate of 50 per cent only as the answer to the first query.

However, even a 40-50 per cent successful vaccine taken in the form of seasonal shots will go a long way in preventing disease in a population as large as India’s, now clocking close to one lakh daily infections.

But then there appears the question of the vaccine’s accessibility. If made by multinational manufacturers, the cost of these shots could be in several hundreds of dollars.

Luckily, this falls in an area that is our forte and our indigenous pharmaceutical companies do have the technology and wherewithal to mass-produce the vaccine.

Also, India has a fairly robust vaccine delivery system, as part of the universal immunisation programmes for pulse polio and tuberculosis.

It is the duty of the Union government, therefore, to stop wasting more time and swiftly put in place a standard operating protocol, ensuring parity of access to all, so that once it is time for state health administrations to take over, the cure reaches the last citizen quickly and inexpensively.