Nadal’s semi-final opponent Del Potro may have given the game away, saying “Rafa” is unbeatable on clay as he has added deadly power to his backhand. 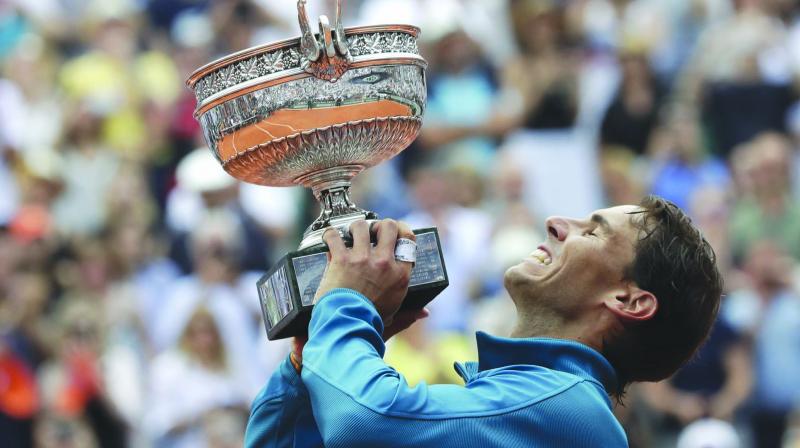 Spain’s Rafael Nadal lifts the trophy as he celebrates winning the men’s singles final of the French Open tennis tournament against Austria’s Dominic Thiem in three sets — 6-4, 6-3, 6-2 — at the Roland Garros Stadium in Paris. (Photo: AP)

Rafael Nadal’s mastery of clay, besides his all-round game that has won him the Australian Open (2), Wimbledon (1) and US Open (3), is an unmatched achievement in tennis history. His dismissal of Dominic Thiem, the only man to beat him (twice) on clay in the past two years, was akin to a French king sending a subject to the gallows. Remarkably, the impassive Spaniard shed tears as his nation’s anthem was played. Surely, an 11-time French Open winner is entitled to let his emotions flow on to the Cup he embraces, like a father cuddling an infant son. “Rafa” was otherwise at his metronomic best, winning Grand Slam #17 to place himself just three behind the greatest modern-era player, Roger Federer.

Nadal’s semi-final opponent Del Potro may have given the game away, saying “Rafa” is unbeatable on clay as he has added deadly power to his backhand. A one-sided final was anticipated. The masterclass was an ode to Nadal’s resplendence, his determination as a sportsman endowed with the desire to win and grit in overcoming a minor fitness glitch in his cramping left hand. At 32, he has probably run more than anyone across the baseline. But who would dare predict he won’t win again at Roland Garros itself to equal or pass Federer’s Grand Slam collection? The greatest feature of the past two years of top-flight tennis is that the two seniors have won the last six Grand Slams between them, and thus proved age is just a number even in the extremely competitive world of sport. On fitness and the desire to win, Federer and Nadal are in a class all their own.