Huge boost for Modi; a big jolt to SP, BSP

The party may expect to be transformed wholly in their image ahead of the 2019 Lok Sabha contest. 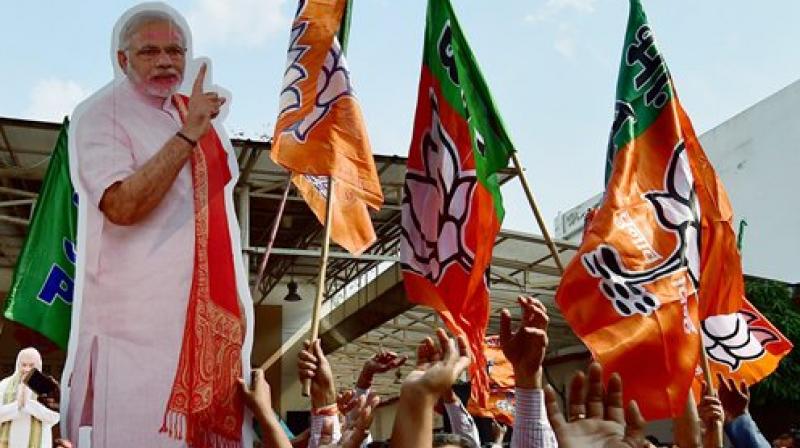 The BJP’s mammoth win in Uttar Pradesh, which was rightly being spoken of as the weathervane for the nation in the foreseeable future, notably the next Lok Sabha polls in 2019, will rank among the poll verdicts Indians are not likely to easily forget. In terms of the sheer political impact it may have, the result ranks alongside the last Lok Sabha polls, in which BJP chalked up the first majority for any government in a quarter century.

If in the Lok Sabha battle of 2014, the big loser was the Congress, in the present election in UP, more than the Congress, the claims of the two regional parties, SP and BSP, have also been shown to be far from credible.

What was also convincingly demonstrated was that the combination of the SP and the Congress proved to be much less than the sum of their parts. In Bihar, the BJP was defeated as all its opponents had come together. Such a dynamic didn’t, however, materialise in UP, politically India’s most consequential state, given its size and population.

In Uttarakhand, formerly the hill part of UP and is still very much an extension of it socially and culturally, the Congress was also trounced by the BJP, with chief minister Harish Rawat losing both the seats he contested.

Evidently, more than anything else, it was the pre-eminent, front-rank leadership credentials of Prime Minister Narendra Modi, who campaigned as though the devil was at his heels, which has been burnished by the poll results.

Although the ideological and personality differences between them are unbridgeable, he appears to have emerged as India’s new Napoleon after the late Prime Minister Indira Gandhi. Mr Modi has captured the public imagination, much as Mrs Gandhi had once done, while analysts scurry about for an explanation.

After these results, the Prime Minister and his close aide Amit Shah, BJP president, will find that their position has become unassailable within their party. All sotto voce criticism will quickly cease. The party may expect to be transformed wholly in their image ahead of the 2019 Lok Sabha contest. The country as a whole, and its policies, may also be sought to be reoriented according to the ideological and political inclinations of these two.

The Congress has done handsomely in Punjab, but it will be measured by its less than low showing in Uttar Pradesh, in which party vice-president Rahul Gandhi spent more than a month campaigning intensively. With party president Sonia Gandhi having more or less withdrawn from public affairs on account of illness, the leadership questions that are likely to arise may be sought to be settled decisively, with a clutch of claimants coming forward.