Opinion   Edit  10 Oct 2019  Lynching by any other name is still a disgrace
Opinion, Edit

Lynching by any other name is still a disgrace

For the faithful, the Vijayadashami speech is the landmark annual event at which the chief lays down the line for the year ahead. 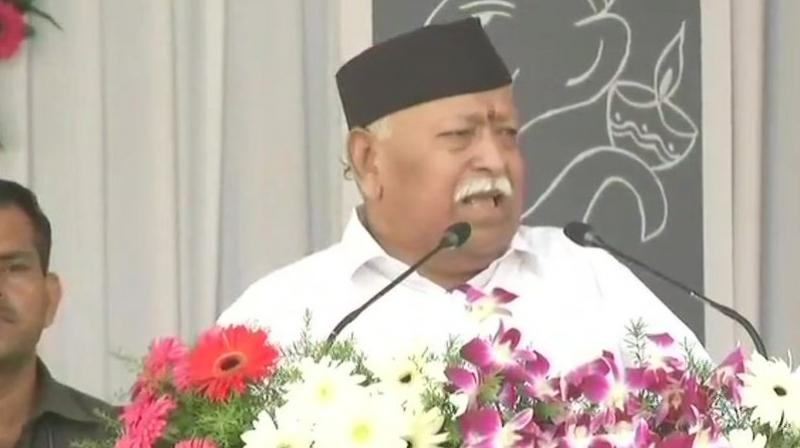 The Hindu-supremacist Rashtriya Swayamsevak Sangh has emerged fully from the shadows and is likely to stay in the limelight so long as its political front, the BJP, enjoys national power and is able to extend its hegemony on significant aspects of national life, as seems evident now. The triumphalist, and didactic, tone of RSS supremo Mohan Bhagwat’s Vijayadashami address on Tuesday made this clear.

For the faithful, the Vijayadashami speech is the landmark annual event at which the chief lays down the line for the year ahead. Since the BJP is in power on its own and has won two Lok Sabha polls on the trot, there is a spring in the RSS’s stride. Although the much-anticipated speech was marked by its hallmark triteness at the intellectual level, it is expected to draw attention for the tone it seeks to set in public life.

If we consider the state of play within the ruling establishment, Mr Bhagwat bracketed home minister Amit Shah along with Prime Minister Narendra Modi when making a reference to the putative achievements of the government, especially in the context of the recent changes made in Kashmir. It is rare to name a government functionary in addition to the leader of the government.

From the perspective of the BJP-RSS, such a development has not occurred since Mr Modi’s single-handed effort brought the BJP to power in 2014 and then repeated the performance, with an improved metric, in 2019. The implications of this intra-party development will, naturally, remain a matter of inference.

Interestingly, in the context of J&K, the RSS chief did not list a boost security and economic development as possible reasons for the extraordinary changes, as the Modi government has done. He cut out irrelevancies and emphatically declared that Kashmir had been on the RSS and Jan Sangh (the BJP’s predecssor) radar since 1953, when the Jan Sangh launched a movement to end Article 370 of the Constitution.

Besides Mr Shah’s status, and Kashmir, the issue Mr Bhagwat saw fit to dilate on was the question of “lynching”. He glossed over the reality that it was causing societal schisms and threatening national unity, and chose to engage in semantics. The RSS chief noted that the word itself was of foreign origin, and was for that reason irrelevant for our purposes. He suggested that no alarm need be caused if some from a particular community killed a few persons of another community. The matter should be left to the police, and forgotten. If such is the understanding that pervades the moral and intellectual plane of the RSS leadership, it’s a reasonable guess that Sangh Parivar cadres on the ground are likely to be encouraged in seeking to sharpening contradictions with minority communities even by employing non-peaceful means.