The tabletop airport, which is traditionally considered accident prone, needs expansion of its runway 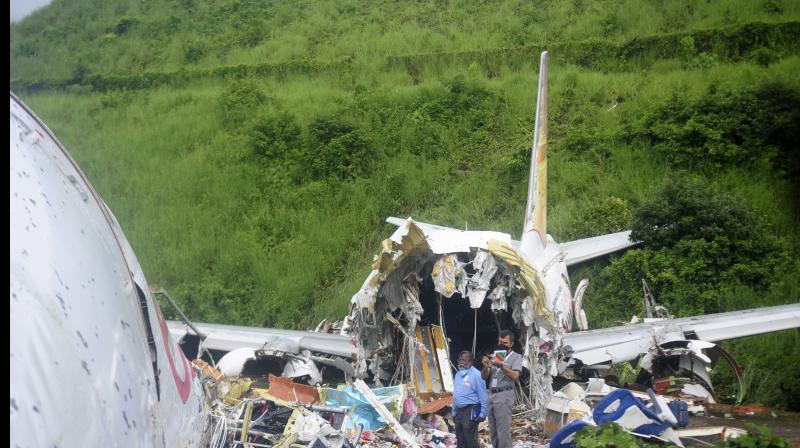 The Airports Authority of India, which runs the airport, and the government of Kerala must act in tandem. PTI Photo

It would be some time before we get to know what led to crashlanding of the Air India Express flight at Kozhikode airport on Friday, which claimed the life of 18 passengers including the pilot and the co-pilot.

The Director-General of Civil Aviation (DGCA) has already initiated an investigation into the accident in which the aircraft, part of the Vande Bharat Mission, carrying 191 passengers including the crew skidded off the runway and ran into a ditch.

Inclement weather and poor visibility coupled with human error have been cited as early reasons but the whole truth will come out only when the investigation is completed. It should also reveal if the systems were made to make amends for the errors that caused a similar accident in Mangaluru airport 10 years ago.

An aircraft is a magnificent engineering product which has evolved over a century and air travel is the safest mode of transport if we consider the number of people using it.

This is basically because it is system-dependent, and recalibrates itself if something goes wrong anywhere in the system. It is imperative on the part of the regulators and the authorities to pick lessons from the Kozhikode incident and improve it further.

While awaiting the investigation report, we must comment on the grace, presence of mind, valour and selflessness, which were on display at Kozhikode immediately after the mishap.

The local residents of the nearby Kondotty town in Malappuram district rushed to the accident site, launched the rescue operations in no time and, with the help of the rescue team from the airport, completed the job in about less than two hours.

They evacuated all the passengers and rushed them to the nearby hospitals despite knowing the fact that they are operating in a Covid containment zone and that many of the passengers could have been infected with the coronavirus.

The timely intervention has considerably reduced the casualty, according to doctors. The social media was awash with photographs of youngsters rushing to hospitals and queuing up to donate blood for people whom they have not heard before.

That, however, should bring certain other disturbing facts to the attention of the government. The DGCA had banned the operation of wide-bodied aircraft under Code E from May 2015 after an inspection by the regulator flagged safety concerns and later in 2018 allowed the same.

The aircraft that met with the accident does not belong to that class but experts have already called for a reassessment of the safety standards.

The tabletop airport, which is traditionally considered accident prone, needs expansion of its runway and the proposal to acquire about 100 acres for the project has been hanging fire for long.

The Airports Authority of India, which runs the airport, and the government of Kerala must act in tandem, discuss it with the people and their representatives and complete the project after meeting their demands at the earliest so that all types of aircraft can have safe landing there.