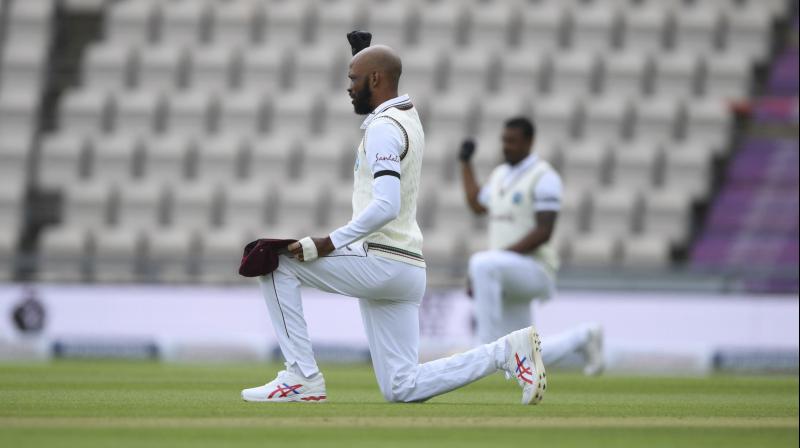 West Indies' captain Jasion Holder, second left, and teammates take a knee in support of the Black Lives Matter movement before the start of the first day of the 1st cricket Test match between England and West Indies. AFP Photo

Cricket made an unambiguous statement against racism long before a ball was bowled in a new season. With a 'Black Lives Matter' banner fluttering on the players’ balcony, cricketers took a knee and raised a black gloved fist to protest institutionalised and structural racism in society, police brutality and worldwide oppression of people based on their race.

The game may have had a colonial past when governed by an Imperial Cricket Conference but, as it progressed into the modern age, it either ignored the racism embedded in sport and society or simply refused to confront it.

A reminder that international sport, ensconced in comforts and money even in these depressing Covid-19 times, may have looked away from racism for too long came from former England captain Nasser Hussain, born to an Indian father and English mother.

It might be impossible to separate sport from politics or play sport without a cause reflecting an athlete’s social background.

Symbolism is, however, sport’s most powerful tool and it was well utilised by the peerless Afro-Caribbean fast bowler Michael Holding who, in a powerful message, also fearlessly called out racial projection of a white, blond and blue-eyed Jesus Christ and a dark Judas.

It is a pity that our leading  cricketers, who are icons of society, have not taken a public stand at a time when the world is standing up in the USA and elsewhere, with sport too lending the weight of its popularity.

In the absence of comments from a stricken conscience, it must be assumed that Indian cricketers are a reactionary lot who are too smug in their riches-laden lives.

We suspected this more than a decade ago when a Team India player got away with a racist comment, the truth twisted by the semantics surrounding a similar sounding Hindi curse phrase and on the back of Indian cricket’s financial clout.

It’s disappointing that Indian cricket has been guilty of “looking away for too long”.