Supplies of food and other essential items to the hills from the plains have been blockaded by agitators. 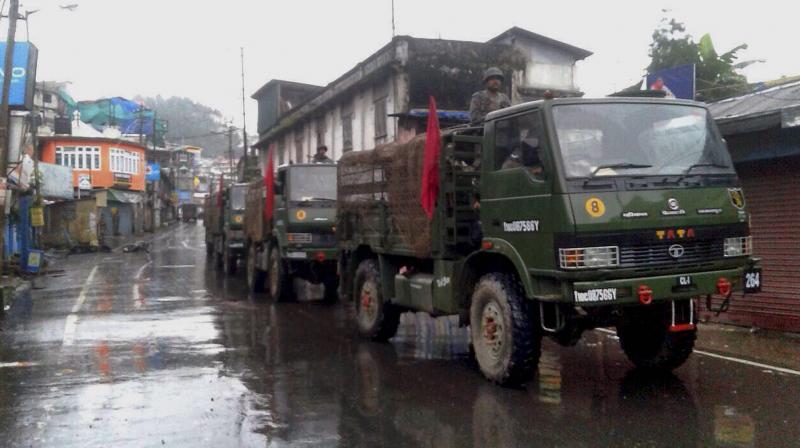 Army redeployed after fresh violence erupted in Darjeeling hills where Gorkhaland supporters torched a police outpost, a toytrain station and clashed with the police at two places in Darjeeling. (Photo: AP)

The Darjeeling hills in North Bengal continue to burn after four weeks of violent turmoil caused by an agitation for a separate state of Gorkhaland being revived by the Gorkha Janmukti Morcha (GJM), an ally of the BJP, that is seeking to oust chief minister Mamata Banerjee’s Trinamul Congress from power in the state.

With three people killed by unknown assailants in the hills on Saturday (the state government denies the allegation that they were killed by the police), the situation has taken a turn for the worse, forcing the chief minister to seek the Army’s help to control the situation.

A station of the Himalayan Hill Railway, better known as the “toy train”, which has world heritage status, was set on fire on Saturday. The police was attacked and government buildings gutted in recent weeks.

The social situation is grim, to say the least. Leading boarding schools, for which the Darjeeling hills are famous, have remained shut after the children were evacuated on an emergency basis. Supplies of food and other essential items to the hills from the plains have been blockaded by agitators, causing extreme hardship to ordinary citizens.

Tea garden operations have come to a halt in the most productive months of the year. This will doubtless hurt exports of the world-renowned Darjeeling Tea, and there should be no surprise if long-term damage is caused to the gardens, impairing a major avenue of employment in these hills.

It was surprising in this volatile situation to see Sikkim chief minister Pawan Kumar Chamling endorse the Gorkhaland demand. Was he nudged to do so from mysterious quarters, or has he himself become a Gorkhaland groupie? The Centre should find out and urge the Sikkim government not to become a participant. That would be most undesirable.

The Union home ministry, which could have played a more restraining role, is yet to show it is as concerned as Kolkata to restore normality at the earliest. There is room yet for home minister Rajnath Singh to play a significant role, specially since the Darjeeling MP is from the BJP and won with GJM support.

With the current standoff with the Chinese Army in the Sikkim area, and Beijing all but threatening to unleash social and political forces to undo the accession of Sikkim to India, the trouble in the Darjeeling hills can potentially degenerate into a problem with a geopolitical dimension. All those concerned must ensure that this does not happen.

The Centre will be overlooking its responsibility if it does not prevail on its partner GJM to start a dialogue with the state government, even on the demand of creating a new state. The CM herself has appealed for dialogue but the GJM continues to respond in the language of violence.