The government must also open up the programme for all sections of the population, co-opt as many institutions, and make the process easier 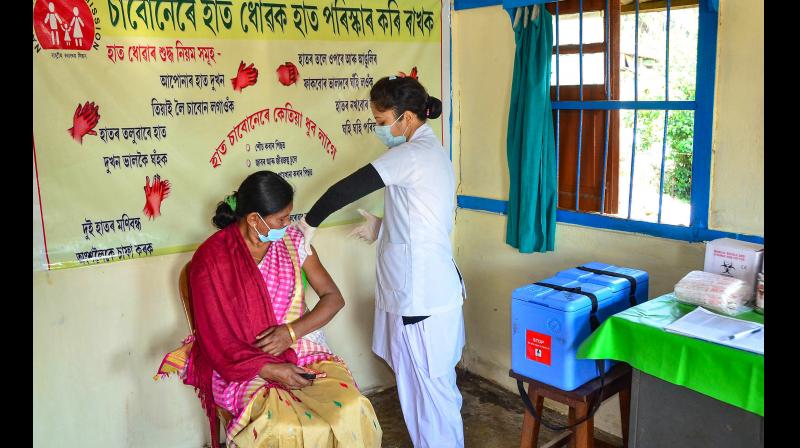 India has of late been witnessing a surge in the daily caseload of Covid-19 infections with the numbers going up for the last six consecutive days; it is above 18,000 in the last four days. The number of active cases has also registered an increase for five consecutive days. At present, six states — Maharashtra, Kerala, Punjab, Karnataka, Gujarat and Tamil Nadu — together account for more than four-fifth of the total cases now. Given the pattern of the virus spread, it is not before weeks if not days that the pandemic will create another wave that could force the nation to go in for another shut down.

India had on January 16 rolled out an ambitious vaccination plan that, in its first phase, sought to inoculate three crore frontline workers, including healthcare professionals. The target has now been met by two-thirds, with the number of people who have received at least one dose standing at 2.26 crore. The second phase, launched on March 1, seeks to inoculate 27 crore people aged above 60 and those above 45 with co-morbidities. As of now, nine lakh people who belong to these categories have been given the jab.

A realistic assessment of the spread of the pandemic and the speed with which the vaccination programme progresses calls for increased efforts on both the counts — a massive awareness campaign to stop the spread of the virus and a revitalised vaccination programme. The daily caseload numbers reached their peak in October and then started a downward journey. Except the Union government and some states such as Kerala, none seems to have kept a tab on the numbers. Worse, the attitude of most states and the people there has been akin to a situation where the virus has ceased to be a threat.

The world in general, and India in particular, are better equipped to take on the virus than we were a year ago. Our knowledge base has improved, the protocols are in place and the healthcare professionals are trained to handle even extreme situations. However, the people’s attitude has become less than acceptable. The government must re-launch on a war footing the campaign focussing on the importance of social distancing, wearing of masks and hand hygiene. It must also revisit the restrictions on gatherings, especially social, political and religious ones, which can turn super spreader events.

India vaccinated more than 16 lakh people on Monday, the highest since the programme started. At the present rate, India will take another year to vaccinate at least half of the population. This is unacceptable. There may be many hurdles, from the shortage of raw material for vaccine manufacturing to the logistical issues to the technical glitches in the CoWin app, and the government must meticulously strive to remove them. It must also open up the programme for all sections of the population, co-opt as many institutions, and make the process easier. Unless we speed it up and cover a reasonable share of the population, we can’t say goodbye to the uninvited guest.