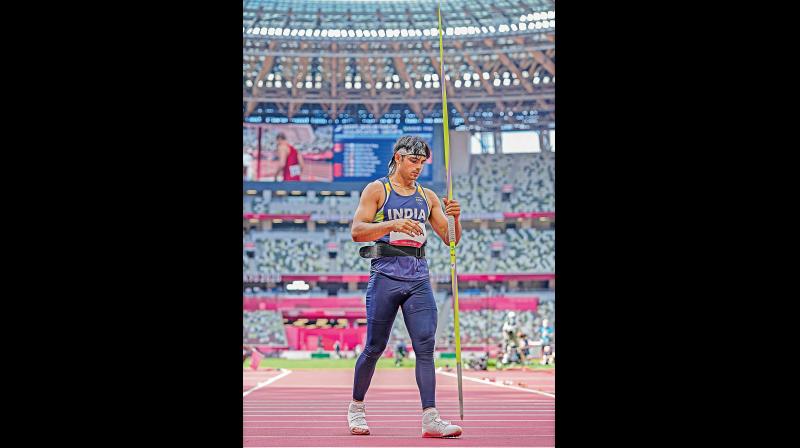 It is moot whether Neeraj has opened the floodgates to Olympic gold medals but what is assured is there will be no dearth from now of athletes striving to achieve their dreams. (PTI)

Neeraj Chopra’s golden arm that propelled the javelin to an Olympic gold promises to change India’s sporting history. A nation with a population in excess of 1.35 billion is filled with zealous followers of sport but when it comes to winning medals on the track and field in blue riband events denoting athleticism as defined in the Olympic credo of “faster, higher, stronger”, it has only been a wistful journey of more than 100 years, of performances that were nearly there but not quite of the podium kind. It took a farmer’s son from India’s wheat granary Haryana to put India on the athletics map. He is the spark that has lit the flame of inspiration.

The ebullient actor-athlete Norman Pritchard, born and educated in India, was the first Asia-born sportsman to win Olympic medals, bagging two silvers in the 1900 edition in Paris in the 200m and 200m hurdles. The IOC still credits those medals to India though the country has been competing officially in the Olympics only since Antwerp in 1920. It took more than a century for an Indian sportsperson to win an Olympic gold medal. Abhinav Bindra struck gold in 2008 in the esoteric sport of shooting in a career marked by a single minded pursuit of the highest calibre performance in the 10-metre air rifle event.

Neeraj Chopra is of a similar mould, his record in the last five years testimony to his graded improvement at hurling the javelin until majestic throws in his first couple of attempts in qualifying and in the final proving sufficient to win the gold and let the main Olympic stadium reverberate with the Indian national anthem.

The discipline of a career in the Army as a Subedar was reflected in his endearing comments crediting legendary middle distance runner Milkha Singh, who lost out on a medal by a whisker in Rome in 1960, as a national inspiration for aspiring athletes.

It is moot whether Neeraj has opened the floodgates to Olympic gold medals but what is assured is there will be no dearth from now of athletes striving to achieve their dreams. The lumbering Indian system has been changing with deep-rooted corruption in administration and prejudice in selection just about making way for an orderly backing of sportspeople with amenities for training at home and abroad and plenty of incentives to excel. It is said that a teenaged Neeraj tried his hand at sport to reduce his weight and was straightaway seen as a natural at the javelin. Since then he has trained hard to be amongst the world’s best with the gold medal just desserts for years of effort.

India may not become a sporting powerhouse in decades to come but a path to sport as a vocation has been illuminated by a golden light. There may be anguish in near-misses as in the golfer Aditi Ashok’s final round of heartache but, going forward, Indian sportspersons can expect to have the backing of a support team and it will be up to the individual to perform in chosen disciplines. The highest haul of seven medals in an Olympics is representative of achievers making their mark in varied fields — javelin, weightlifting, boxing, badminton, men’s hockey and wrestling — to show that India is just not all cricket when it comes to winning performances.