As terror strikes Iran, be on alert

Women terrorists were involved along with men, and a strike at a third location was averted, according to Iranian official sources. 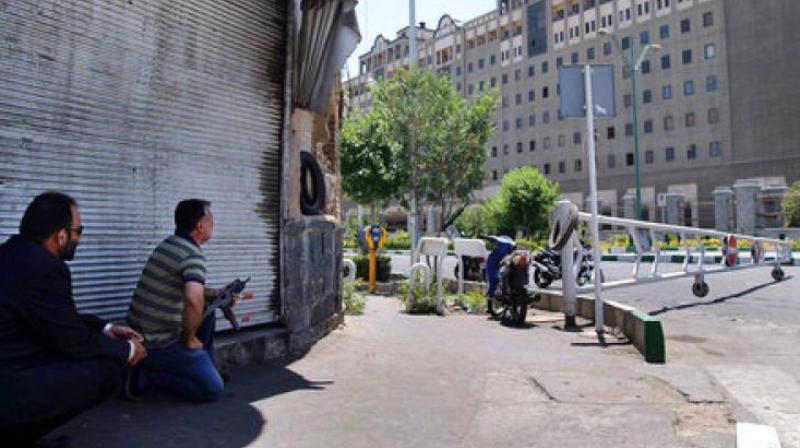 The Islamic State group claimed its first attacks in Iran on Wednesday as gunmen and suicide bombers killed at least 12 people in twin assaults on parliament and the tomb of the country's revolutionary founder in Tehran. (Photo: AP)

Terrorism returned to Iran after some two decades on Wednesday when its Parliament was attacked in central Tehran and the mausoleum of the founder of the revolutionary Islamic republic, Ayatollah Ruhollah Khomeini, brought under assault in the southern part of the capital, suggesting a meticulously executed operation in which 12 people were killed and more than 40 injured.

Women terrorists were involved along with men, and a strike at a third location was averted, according to Iranian official sources. The attackers used assault weapons and suicide vests.

The spectacular choice of targets presages retaliation from the Iranian side. This could conceivably take the form of strikes by irregulars inside Saudi Arabia and Islamic State positions in Syria and Iraq. ISIS claimed responsibility as the Parliament attack was in progress.

However, the Iranian authorities have not minced words in directly accusing Saudi Arabia, noting that (Sunni) terrorists hit (Shia) Iran exactly a week after US President Donald Trump, on a visit to Riyadh, endorsed an ideological and strategic line targeting Iran as the source of terrorism. Such a US-Saudi characterisation of Iran is both selective and self-serving, but it was energised right away. Riyadh and a clutch of Gulf Arab states announced a diplomatic and economic blockade of Qatar (also a Gulf Arab Sunni monarchy) which has posited that a bleak view of Tehran was not necessary.

As a background to the Trump visit, Saudi Arabia had created a military alliance of Sunni states ostensibly to fight terrorism, but aimed at Iran and Syria in reality. The force is headed by former Pakistan Army Chief Gen. Raheel Sharif.

Officially, Pakistan is not taking sides between Saudi Arabia and Iran. The former is a huge benefactor, while Iran an immediate neighbour. But it is on the cards that Sunni terrorist outfits in Pakistan will rev up activity against Iran. Tehran had recently warned Islamabad that its forces will cross the border to deal with terrorist groups if Pakistan was unable to do effective border management on its side.

In India too, the authorities will need to be on guard to take preventive action over possible Sunni-Shia clashes. In this country, these are far from common but still not wholly unknown. In fact, all countries with Sunni and Shia populations should be watchful against sectarian elements seeking to provoke clashes.

If the scenario unfolds in an ominous direction, the West Asia-North Africa region could remain more strife-torn than ever. In that event, there could be obvious difficulties in expecting any meaningful steps towards a resolution of the Palestinian issue. Israel will be emboldened as Iran is sought to be corralled simultaneously by Riyadh and Washington. Coordination between the United States and Russia even to fight ISIS could also suffer.