Gesture politics on the field

The players also donated their day's match fee for the one-day international played in Ranchi against Australia to the National Defence Fund. 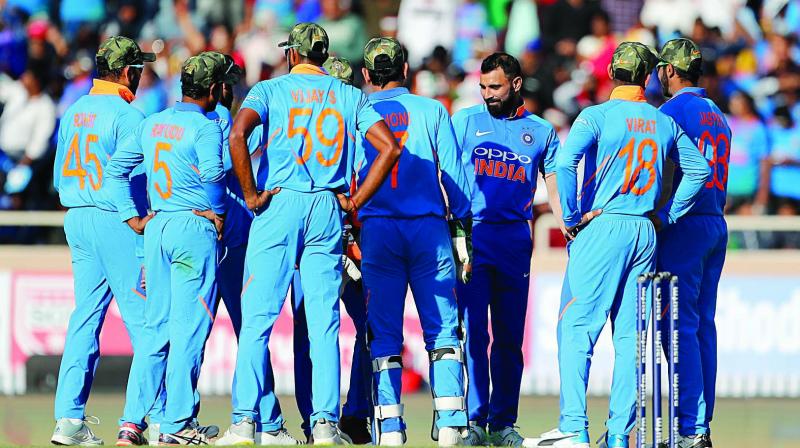 In a first-of-its-kind move, Indian players don camouflage caps as a mark of tribute to the CRPF personnel who lost their lives in the Pulwama terror attack. (Photo: AP)

On Friday, the Indian cricket team members wore military camouflage caps as a tribute to the CRPF jawans who laid down their lives in the Pulwama terror attack. The players also donated their day's match fee for the one-day international played in Ranchi against Australia to the National Defence Fund. Considering their vast following, the gesture of solidarity with a national defence cause would have been appreciated, as would have been their monetary contributions. However, the gesture came somewhat late as the match was played on March 8, three weeks after the February 14 attack. It also felt a bit contrived. The move could be attributed to someone within the Board of Control for Cricket in India (BCCL) or the Supreme Court-appointed Committee of Administrators (CoA) waking up late and wishing to curry favour with the authorities by getting the national team to display its empathy.

But the more touching act on the part of the cricket administration has been that of doing away with the garish opening ceremony for Season 12 of the Indian Premier League and donating the money saved to the widows or relatives of the 40-plus men who died in the horrendous attack on the CRPF convoy. Since the BCCI or its CoA has been known to spend upwards of Rs 30 crore on such openings, the fund to support the widows would get a substantial contribution while also sparing genuine cricket lovers the unnecessary sight of matinee stars cavorting and gyrating on a stage on a cricket ground while fireworks rent the air. Given the symbolism of a camouflage cap in an international cricket match, it would be interesting to see what the government decides vis-à-vis playing Pakistan  in England for the World Cup on June 16.