Fierce antagonism lies ahead in politics

In less than a week from now both the BJP and the Congress plan to hold nationwide protests from opposing perspectives. 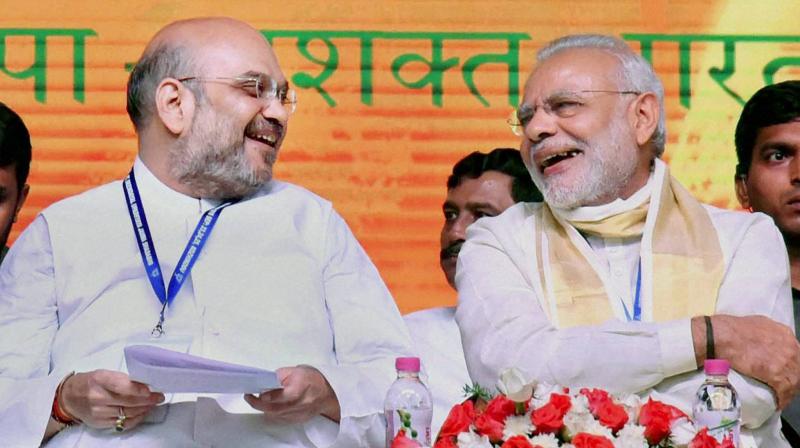 Prime Minister Narendra Modi and BJP president Amit Shah opened their gun muzzles almost simultaneously on Friday, the former from Delhi and the BJP chief in Mumbai, where he opened a major party workers’ conference on the 38th anniversary of the BJP’s founding.

Political war erupted between the ruling BJP and the principal Opposition party Congress immediately after the very contentious Budget Session of Parliament ended on Friday, indicating that the time between now and the upcoming Lok Sabha election — whether it is advanced or held on schedule — may be full of ugly confrontation.

It is the intensity of what the saffron party threw at the Congress that appeared surprising, considering that the Congress won only 44 Lok Sabha seats in 2014. Evidently, the BJP still sees it as a potent foe.

Prime Minister Narendra Modi and BJP president Amit Shah opened their gun muzzles almost simultaneously on Friday, the former from Delhi and the BJP chief in Mumbai, where he opened a major party workers’ conference on the 38th anniversary of the BJP’s founding. The duo chose to speak in high decibels.

Mr Shah’s intervention was perhaps the more striking for comparing the Opposition — the Congress being the principal target — with “snakes” and “dogs” and other creatures of the animal kingdom.

This was surprising even for this country where the tone of the political discourse has dipped forebodingly. It can now be recorded with certainty that genteel language in politics, alive until recently, can now only be found in the archives.

The Prime Minister, in contrast with Mr Shah, accused the Congress of spreading “lies”. If this is a riposte to the points being raised by the challenger in the recent period, then it would seem that the point has gone home. It wasn’t thought likely that a party, which is said to have no base left in many parts of the country, would be deemed so much of a threat.

Surprisingly, Mr Modi returned to a ploy he used in the last election — that the Congress didn’t like him because he was from the backward caste and had yet become PM. At a time when as many as four dalit BJP MPs have written to Mr Modi complaining about the party’s stance on dalits, this is unlikely to be a gambit that would appeal to the poor.

In less than a week from now both the BJP and the Congress plan to hold nationwide protests from opposing perspectives. After the end of the Budget Session, MPs of both parties (including Rahul and Sonia Gandhi for the Congress and Cabinet ministers on the BJP side) confronted each other in the Parliament Complex. In the House, as a sign of stepped-up confrontation, parliamentary affairs minister Ananth Kumar accused Sonia and Rajiv personally of disrupting proceedings — a factual inaccuracy.

Given the level of bad blood that prevails, the Congress boycotted the Speaker’s tea on Friday. Many are not happy the way the Speaker handled the demands of the Opposition to be heard, but the tea was a point of protocol and should have been adhered to.