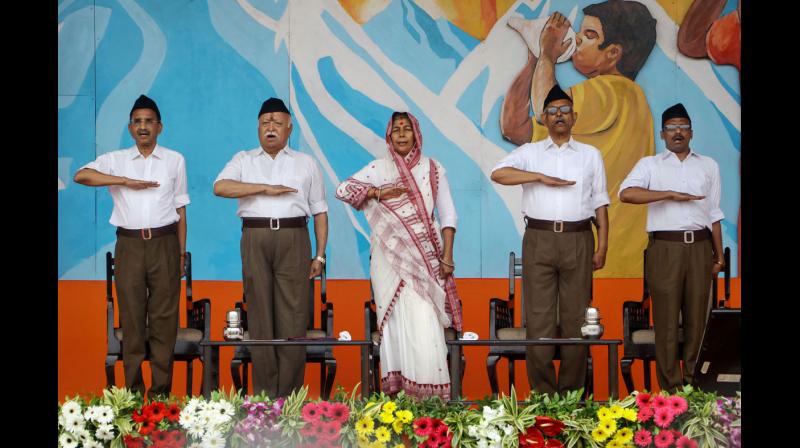 The significance for India of the annual speech of the sarsanghchalak of the Rashtriya Swayamsevak Sangh (RSS) on the occasion of Vijaya Dashami, the culmination of the auspicious festival of Dussehra, lies somewhere in-between the papal proclamation and address on Christmas Eve and the US President’s state of the nation report address to Americans.

Of course, RSS sarsanghchalak Mohan Bhagwat is neither the spiritual head of Hindus as the Pope is for Catholic Christians, nor is he an elected head of government as the American President; but during a decade when the BJP has absolute majority in the Lok Sabha, and is significantly dominant in many of the states, the address is as crucial a pointer as the speech of the Prime Minister from the Red Fort on Independence’s Day.

In comparison with the last five years’ speeches, his speech was by far one of the most inclusive, and as close it can ever get to being liberal, humane and secular; it offered a highly constructive agenda to all Indians, with a special place for the most vulnerable — Muslims and women.

Walking the talk of its chief on women empowerment and an emphatic assertion that without the progress and empowerment of women, no society can progress, the RSS invited Santosh Yadav, a woman mountaineer, the first to climb Mount Everest twice, as a chief guest at its event — another first, with no woman ever before had been the chief guest at the RSS annual conclave.

Setting an unambiguous agenda of rapid empowerment of women, Mr Bhagwat publicly laid bare how Indian male hypocrisy keeps women curtailed and restrained, relegated to the kitchen or working at home for the family; seldom allowed to play a greater role in the economy. Given the reach and influence of the speech, it is heart warming and in the tenure of India’s first tribal woman President, the Narendra Modi government must take heed and push the agenda with all its might.

Unmistakably, the RSS chief also spoke about population control and set it between the two extreme views of population as a liability and as an asset, speaking of how resources are needed to harness people and transform them into assets.

But neither would fructify if there is a deep sense of communal mistrust and suspicion, or a showdown of fear hovering over the minority community, which, Mr Bhagwat, addressed directly. Hindus don’t want to conquer or subjugate anyone... they only want to be strengthened enough to ensure they don’t get conquered again, he suggested.

The Modi government has significantly put women at the highest of priorities in policy making since its first term; from the Ujjwala Yojana to construction of toilets and pushing India rapidly towards the ODF status, to the abolition of triple talaq, among others. In recent times, there is an increasingly clear reach out to Muslims, at least certain sections of them — including women and Pasmandas (lower castes) from the Hindutva side, and it can only augur well for all of India.