It indicates a meaningful step on India’s part to negotiate a multi-polar world without looking over its shoulder. 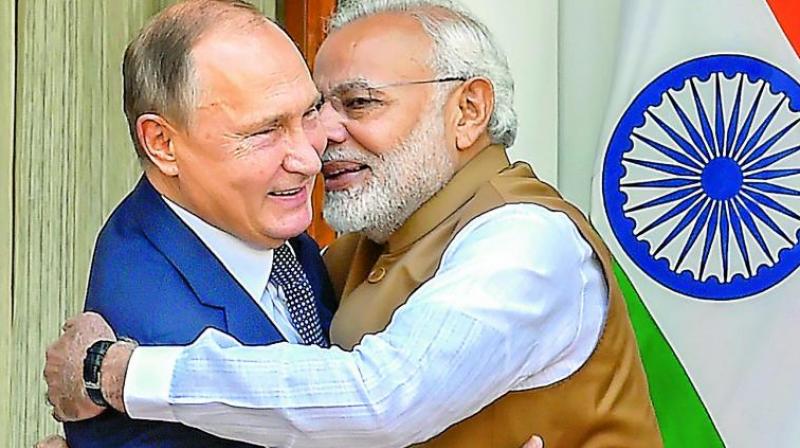 India signing the contract for the purchase of the S-400 Triumf missile system from Russia on Friday during President Vladimir Putin’s two-day working visit to New Delhi stands out as a positive sign. It indicates a meaningful step on India’s part to negotiate a multi-polar world without looking over its shoulder.

The present government had given every impression so far of being too solicitous of US concerns in the foreign policy and security arenas, permitting serious observers to wonder if it was going to turn its back on Moscow, a time-tested strategic ally which of late had begun to align its foreign policy away from New Delhi’s in the regional context, in part due to the perception that India appeared to have made up its mind to play second fiddle to Washington.

The signing of the five billion dollar contract for arguably the world’s most advanced system — which can not only effectively counteract enemy aircraft but also intermediate range ballistic missiles (IRBMs) — has come in the wake of threats of the agreement possibly attracting US sanctions under America’s recent law Countering America’s Adversaries Through Sanctions Act (CAATSA). While this law is the latest instrument in the US armoury to be used against Russia, it also menaces other countries with sanctions for entering into defence and other strategic agreements with Russia, although waivers are factored in.

What Washington will do about India concluding the missile deal with Russia is not yet known but the US embassy in New Delhi has spoken with remarkable restraint in its media response on the issue. It has just said that “CAATSA is not intended to impose damage to the military capabilities of our allies or partners.” This suggests Washington is giving itself more time to devise a suitable view in light of its meaningful all-round relationship with India.

America will be showing maturity if it can sustain this stance. It will be short-sighted of it to expect that any country trying to be in step with it on a broad range of issues must also sign up on adopting all of its political and strategic preferences. The west Europeans, for instance, who are America’s natural allies, do not see eye to eye with it on not doing any business with Iran, which under the Trump administration is seen as the number one adversary of the US after Russia.

Apart from signing up to purchase the Russian missile system, India has also signalled activating synergies on strategic aspects of international life such as space exploration and energy sector cooperation, although it is evident that Moscow and New Delhi have different positions on Pakistan, possibly Afghanistan, and the Asia-Pacific (of late being called the Indo-Pacific by the Americans) where constraining China is emerging as a key US concern. However, this is to be expected in a multilateral global arena in which the leading powers do business with one another to the farthest degree they can but not hesitate to declare their divergences.